Travel and fine dining required (but it's not all glamourous) 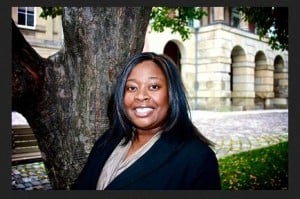 Michele Simpson is a manager of media relations for Tourism Toronto. Her job is to encourage foreign travel writers to visit the city and, while they’re in town, she shows them where to go and what to do. Simpson’s goal is to show off the best of what Toronto has on offer so that they’ll share it with their readers, encouraging more visitors.

She found public relations serendipitously. While studying psychology and humanities at York University, her sister opened a book of post-graduate programs at Seneca College, started reading about corporate communications and noted how much it sounded like Michele. On top of the B.A. and the Seneca certificate, Simpson holds a writing certificate from George Brown College.

Here she talks about the ups, the downs, the pay and the perks of her public relations career.

Is P.R. as glamourous as it looks on TV?

One of the reasons I got into P.R. was because it did look somewhat glamourous. But it is not. There are different facets of P.R. where it can be glamourous, but for the most part it’s a lot of hard work. A lot of hours are put in before you even get to that party or premiere or special event. Even when you’re at these events you’re still working. I know in the past a lot of TV shows or movies have glamourized P.R., but people are surprised when they find out how much goes into the work.

If the hours are long, what do you like about the job?

It’s very simple. I love the end product. When I’ve put in some strong work and I open up a magazine or turn on the TV and see something that we had a direct hand in—that is very rewarding.

Do you get to do a lot of traveling in your job?

I do a lot of traveling. My beat is overseas so I get to go to London, Paris and Berlin on a regular basis. In 2012 I went to China for the first time. The year before that I went to India. I’ve been to Italy with my job. The key to our job is being able to make connections through face-to-face meetings with writers and with the people we want to pull into the city.

You also get to show off Toronto to visiting writers. What’s your favourite part to show off?

That’s a tricky one. I guess I’m sounding like a P.R. person, but the truth is there are so many great things about our city that it’s hard to just pick one. We have booming theatre districts, great museums, amazing restaurants and amazing talent. One of the reasons I love this job is because Toronto is the product and there are multiple facets to that product. One day I’m trying to sell the history of the city, the next day I’m selling the fashion of the city, the next day it’s the food.

What are some misconceptions people have about Toronto?

Boring. I think a lot of people think we’re kind of like New York but quieter and slower, but we have a lot of people from New York who are pleasantly surprised by Toronto. We have people all the time coming in from France, the U.K. and Germany and they’re almost all surprised because they don’t know what to expect. The feedback I always get is that we have a hidden gem here.

Can you give me an example of when you were able to overcome that misconception?

Last year we hosted over 640 writers in our city and with almost every single one of them we’ve been able to overcome the misconception about what our food is like by taking them to restaurants. We have 7,000 restaurants. Whenever I have a writer come in, I’ll challenge them and tell them, “tell me one kind of food are you interested in?” and I’ll find them a restaurant.

What type of people are well-suited to public relations?

Hard workers. It goes back to that idea that it’s not glamourous. It’s long hours. You have to be willing to put in the hours. Apart from that, you need to have a strong creativity because you’re always tasked with different problems and you have to be creative in how you sell your story. I think time management is key because our job is based on other people’s deadlines. A lot of people when they come into the industry—and I get this a lot from people who are just starting out—say they’re great with people and they love to talk. Well, that’s part of it, but that’s not all of it.

How has your education prepared you, if at all, for your career?

I studied psychology and humanities. That taught mostly critical thinking. I did a lot of communications classes and writing classes, which taught writing. Then I did a public relations course at Seneca College and I learned about the deadlines. I had one class and the teacher would interrupt us constantly and the purpose of that was [to teach] that in this industry you’re not going to be given time to write things uninterrupted. You’re going to be working toward five different deadlines.

Tell me about a really interesting day that you had recently on the job.

We went to London World Pride (2012) to promote World Pride Toronto in 2014. It’s like Pride Toronto but 10 times the scale. We rented a suite and had a lot of LGBT writers come in. We had this lovely drag queen named Bella with a tub full of pink and purple balls like those ones kids get at McDonald’s. I had this surreal moment where I was like, no one prepared me for this in school nor did I think my career would involve standing in a suite with 200 people having drinks, enjoying loud music, and having a great time with a drag queen throwing balls at me!

What did you learn in China?

In North America we’re very news driven whereas in China it’s really entertainment driven. When you have a press conference here there’s a guest speaker and a PowerPoint, but in China you have these lovely girls dressed up in… almost like awards show gala dresses. The U.K., India, China, France—they all do P.R. a bit differently and one has to be respectful of those differences.

Public relations is a wide range. If you’re doing P.R. for a pharmaceutical company versus a non-profit, the pay is drastically different. If you’re working in an agency versus working in the corporate side, it’s very different. But someone very junior would start out around $35,000, possibly $40,000. That would be starting as a coordinator. And then they can climb up very quickly.