What students are talking about on December 20th 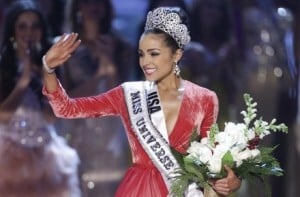 Olivia Culpo, waves to the crowd after being crowned Miss Universe (Julie Jacobson/AP)

1. For the first time in 15 years, Miss USA has been crowned Miss Universe. This, as Gawker points out, on what some believe is right before the universe ends. Olivia Culpo, a 20-year-old from Boston University, has a rags to riches story: she wore a $25 rented dress with a hole in it to her first pageant last year. Before you dismiss her as another one of those backward American pageant girls (remember this one?) consider that she supports transgender rights and plans to use her title to champion HIV/AIDS prevention.

2. Brian Pallister, Manitoba’s Progressive Conservative opposition leader is denouncing racist comments from the party’s former youth president, but says he will not apologize. Braydon Mazurkiewich resigned after posting comments on Facebook that referred to “freeloading Indians.”

4. Also in Toronto, politics geeks are trying to tease apart all the possible vote-splitting scenarios that could arise, depending on who runs against Rob Ford in the next city election. Ivor Tossell says this is good time for the city to consider ranked ballots. “It works like this: Instead of voting for one candidate, voters would instead rank the candidates in order of preference. When the votes are counted, if a single candidate has 50% of the first-choice vote, they win. If nobody reaches 50%, then the last-place finisher is dropped from the ballot, and their supporters’ second-choice votes are distributed. The votes are counted again, and the process repeats itself until someone has secured 50% of the vote. In this way, a broader consensus is needed to get elected; strategic voting becomes a secondary consideration; and candidates have more incentive to be less polarizing.”

5. Conservative Park Geun-hye won South Korea’s election. She may be the first-ever female president-elect, but, as CNN put it, “there’s a catch.” Park is daughter of a former dictator.