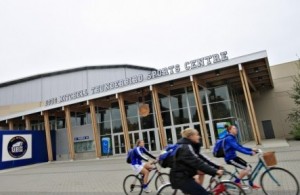 Daniel Bourghardt, a third-year arts student, was overjoyed when he got an email from the University of British Columbia on Sept. 9 saying classes will be cancelled on Sept. 18.

In a grand gesture of solidarity with First Nations communities, the university has called off classes to encourage students to participate in the Truth and Reconciliation Commission’s (TRC) national event at the Pacific National Exhibition across town from the Vancouver campus. It’s part of a Reconciliation Week that includes performances, survivor gatherings and a downtown march on Sunday with a keynote speech by Bernice King, daughter of Martin Luther King. Trinity Western University, a Christian school, is also suspending classes.

For many students, however, today is nothing more than a midweek break. “I only read the part that said we don’t have school,” says Bourghardt. He’s not planning to attend and will instead be spending the day catching up on assignments.

While he’s happy that classes are cancelled, not everyone thinks it was the right move.

The cancellation is meant to raise awareness about Canada’s residential schooling system. For those who don’t know, between 1875 and 1996, more than 150,000 Aboriginal children were shipped off to boarding schools as part of a Canadian government policy to assimilate Aboriginals into the dominant culture or, as some put it, “to kill the Indian in the child.” Many were physically and psychologically abused. A notable minority suffered sexual abuse. The TRC, established in 2008, aims to educate the masses about this tragic episode in Canadian history and to celebrate the people and culture that persevered in spite of these obstacles.

Peter Spencer, a first-year UBC law student says residential schools are an important issue but not worth suspending an entire day of classes. “They can encourage students to attend the hearings and maybe hand out pamphlets on campus to bring awareness to the issue,” he says, “but I’ve never heard of any university shutting down for something like this.” He thinks UBC should have asked students via referendum whether they wanted the cancellation.

“It’s a statement the university’s making and I don’t think it’s a big enough issue to do that,” he says. “I think there are bigger issues out there, so why single this one out?” he adds, suggesting the war in Syria is a worthy topic of discussion and no one is cancelling classes for that.

Jin Li, a UBC student from Shandong, China, sees the TRC’s prominence as a positive development. “We should acknowledge and welcome [the reconciliation process],” says the first-year commerce student, “so we can be more aware of Aboriginal culture,”

For Tabitha Schooner, in year three of a native teaching program, the TRC events are deeply personal. “My grandpa went to a residential school when he was young,” she says. “Native history is very important to me because it’s a contributing factor to a lot of First Nations issues today.”

She applauds UBC’s decision to cancel classes on Wednesday so that she won’t have to worry about missing lectures. “I strongly recommend [for] everyone to attend,” she says. “[Aboriginal history] plays a very big part in Vancouver,” she adds. “We’re actually standing on Musqueam territory.”

Though Bourghardt remains adamant he won’t attend due to his workload, he agrees reconciliation is worth talking about. “If you don’t discuss it, you’re going to make the same mistake again.”