More police than protestors in London 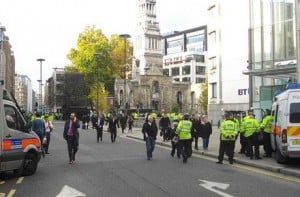 Despite having 4,000 police ready in case the protest got out of hand, Scotland Yard says that only about 2,500 protesters showed up for a mass rally against high tuition fees in London, U.K. Organizers, on the other hand, told Sky News that 10,000 showed up, though they hoped more would have joined. After all, more than 50,000 marched with the same demands in the summer, during which protesters smashed the windows of the Conservative party’s headquarters.

At today’s protest, students carried placards denouncing the government’s policy that allowed tuition fees to rise to $14,500 at many schools. Some showed their middle finger as they passed the London Stock Exchange. Twenty were arrested by 4 p.m. local time, police told The Telegraph.

Police had warned on Monday that they would use rubber bullets and batons if necessary to quell violent protesters. Twitter users blamed police intimidation for the lower-than-expected turnout.