But Paul Dewar doesn't have much support 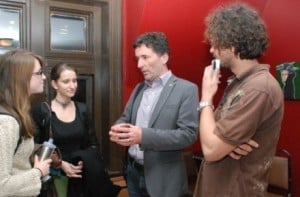 No fewer than nine people are fighting for the leadership of the New Democratic Party of Canada.

Now, one candidate has distinguished himself by promising gifts for students—in the form of cash.

Paul Dewar, member for Ottawa Centre, released a plan last week that would provide 10,000 youth with tuition grants in exchange for time served with non-profits, either in Canada or abroad. Those youth would get $1,500 per month to cover expenses during their years of volunteer work and up to $6,000 more for education or training.

But that’s not all. Dewar says he’d reduce interest on the federal portion of the student loan to prime (potentially saving students thousands), he would reduce tuition fees by $700 per year and he’d provide $200-million more in grants for low-income, disabled and Aboriginal Canadians.

Advocates of lower tuition will be paying close attention to the platforms of potential federal leaders, because provincial governments—the main funder of post-secondary education—are running out of money. Just look at Ontario, where the record $190-billion debt caused Moody’s last week to downgrade the province’s credit rating from “stable” to “negative,” making it harder for the province to borrow. Quebec’s debt is even worse on a per capita basis. Other provinces aren’t far behind.

But students dreaming of free money shouldn’t get too excited. A recent analysis of endorsements by ThreeHundredEight.com shows that Dewar is a long-shot. Brian Topp, Thomas Mulcair and Peggy Nash are the only candidates with substantial numbers of important endorsements.

Dewar doesn’t even have much support among the NDPs many student-aged members of parliament. MP Isabelle Morin, Chair of the Youth Caucus, endorsed Topp. So did McGill student-turned-MP Charmaine Borg. Three other 20-something MPs, Pierre-Luc Dusseault, Alexandrine Latendresse and Marie-Claude Morin, have all endorsed Mulcair.

Dewar doesn’t fare well among Canadians in general, either, according to a Forum Research poll conducted for the National Post. In that survey, conducted last Tuesday, 45 per cent of 163 decided NDP voters supported Mulcair, 16 per cent supported Nash; Topp and Dewar had only eight per cent each. Eight per cent was the margin of error.

Still, in a race with this many competitors, anything could happen between now and the convention where the new leader will be crowned on March 24 in Toronto.