Never mind the haters. Gaming is a sport. 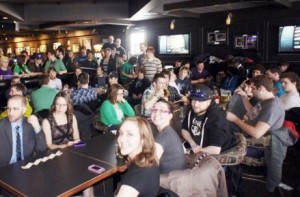 Let’s say I’m a basketball junkie who is absolutely in love with the game. Not only am I an avid spectator, but I also practice the game religiously to master the craft. Some of my training days consist of six hours of drills, workouts and exercises so that I can kick butt in my next match. This scenario probably doesn’t faze you at all, because this is what an athlete does, right?

But replace the orange ball with a video game controller, and suddenly I’ve gone from a dedicated athlete to a gamer with a problem.

On March 17, Dino’s pub near the University of Saskatchewan held an event called Barcraft for people who wanted to watch the Major League Gaming winter tournament for StarCraft II.

I don’t find myself gaming very much beyond the occasional Super Smash Bros and the newest Wii releases, so walking into Dino’s that day was a complete shock. The place was packed with fans watching a live stream from Dallas of head-to-head combat between two professional StarCraft players.

I watched as fans ate their nachos and sipped their green St. Patty’s day beer, noticing something that haters of the hobby are reluctant to accept—gaming is a sport.

Millions of people worldwide tuned into the winter tournament and with loud cries and boos and overall pandemonium, the crowd at Dino’s looked like it was watching any other big-ticket sports event.

Why is it that whenever we think of hardcore gamers we picture a sad fat guy with a bag of Cheetos in one hand and a controller in the other? We think of gaming as all-consuming and unhealthy, but can’t that argument be applied to any sport? Some might say the difference is that athletes keep themselves in shape and maintain a healthy diet for their craft. But in reality, not every gamer gives up physical fitness to compete in video game tournaments.

Don’t believe me? You can ask Nik Lentz, an Ultimate Fighting Championship athlete who is also an avid StarCraft player, if the eSport—competitive video gaming—he loves so much is deterring his career as a professional ass-kicker.

Barcraft host Alan Wrubleski says the best thing about StarCraft is its community, just as with any sports following.

It’s easy to find a new bud at any bar by sharing a mutual love for the Roughriders, but it’s not so easy to blurt out your love of gaming outside certain spaces where you know you’re likely to find other gamers.

The vast majority of us play video games, but most of us don’t call ourselves gamers. Why is this? One reason is that the games we play usually aren’t as “hardcore” as the ones we think self-proclaimed gamers play.

I might play Angry Birds during my entire 50-minute class today, but I’m not as “obsessed” as the guys who play Call Of Duty for eight hours. The wider populace seems to look down on those who game passionately.

Wrubleski considers himself a “closet gamer” because of these still-prevalent stereotypes.

It seems, however, that the only people who view gaming in a negative light are those of us who live on the western hemisphere. In Korea, eSports are a major part of the sporting community and fans of StarCraft are as common as hockey fans here in Canada. Corporations in Korea aren’t blind to the large and growing culture: sponsors are flocking to spectating events where audiences aren’t afraid to unleash their inner geek.

In university we get into hobbies, majors and fandoms that others may criticize. But whether we do something for sport or as a career, we don’t need pretentious people telling us that something we enjoy will make us social outcasts.

I call for all those “closet gamers” to march out of their closets unapologetically and embrace their fandom like fans of any other sport.

If we keep letting others’ snobbish attitudes shape who we are then it is game over for all of us.

This appeared in The Sheaf student newspaper at the University of Saskatchewan where the writer is a third-year biology student.