It's the go-to resource for students about Canadian universities 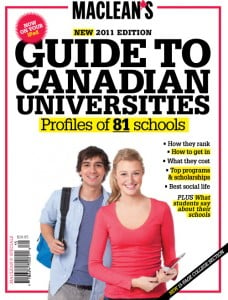 This year’s Maclean’s Guide to Canadian Universities is sure to get a lot of double takes on newsstands.

The go-to resource for students about Canadian universities and colleges since 1996, the guide has been transformed with a new look and new content. It is being distributed across Canada this week.

The 2011 guide, a standalone special interest publication, is now more compact at roughly nine by seven inches (it used to be the same dimensions as a standard Maclean’s issue).

It has also packed more information into its 256 pages, said Cathrin Bradbury, manager, Maclean’s intelligence unit. The results of student surveys showed readers wanted information on more schools, so the coverage has jumped from 69 schools to 81 in this year’s guide.

Students also wanted more finance-related content, such as stories on how to budget. In response, the new guide has articles on options for paying for school and how to stretch your textbook budget.

Visuals were also important to readers – “kids want to see where they might go, what the people look like and whether it feels like the right fit,” said Bradbury – so the guide now has added approximately 350 photos of campuses and campus life.

“It’s really meant to be a utility book,” she added. In addition to the format change to the easier-to-carry book-like size, the new guide features excerpts from Maclean’s annual University Rankings (which appear within the pages of a regular Maclean’s issue).

Bradbury said the goal was to create a resource that is both authoritative yet approachable. To help achieve the latter, a new element was added that features a 22-year-old Maclean’s intern, Stephanie Findlay, who traveled across Canada to get the scoop on 25 schools and residence life from undergrad students.

There are also iPad videos to supplement that coverage, including interviews with nutritionists and professors, as well as photo archives for each of the schools. “The iPad really helps with the utility because we only have so much room in the guide,” said Bradbury.

Reaction to the new format and content has been positive so far, said Julie Osborne, the magazine’s deputy publisher and the senior director, business planning at Rogers Consumer Publishing. The rate card hasn’t changed from previous editions of the guide, she said, and it is being distributed in the same channels as in previous years, including Chapters, Shoppers Drug Mart, Walmart, Loblaws, Costco and airport magazine retailer HDS.

The Guide to Canadian Universities has had a similar look for a long time, said Bradbury. “I think students and the marketplace are very different now; there are a lot of ways to get your information, so it’s more competitive.”

Maclean?s and Marketing are both owned  by  Rogers.