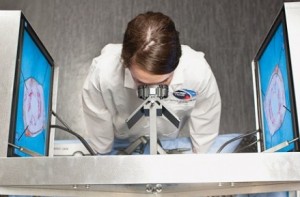 From the 21st Maclean’s University Rankings. Get your copy today.

Contrary to popular belief—and what you may see in the movies—academic research isn’t only for master’s students, and undergrads do more than just drink beer: they do research, too. In fact, there are lots of exciting collaborative research projects currently underway at universities across the country, where undergraduate students and professors are working together to help change the learning landscape. See for yourself, below.

UBC master’s students Samantha Brennan and Aidan Whiteley—with the guidance of their cartography and society professor, Jon Corbett—are still engaged in the research project they began as undergraduate students in 2009. When the Okanagan campus undergrads realized that forest fire maps were inaccessible to the public, they enlisted Corbett’s help in building a fire-mapping tool that local residents could use to access data on burn areas, as well as review actual human experiences pertaining to the fires—as opposed to only facts and figures. Brennan and Whiteley’s project, which has been dubbed the “Facebook of forest fires,” also included real-time Internet videos and timelines.

Six years ago a group of fourth year U of R engineering students took on a project to help communities and corporations prevent problems in the pipes of buried infrastructure. The Regina Pipe Crawler, as it’s known, is a robotic platform with the ability to “move against gravity in vertical sections of the pipe.” The project—which students and faculty are still updating today—was featured inPopular Mechanics magazine in 2009 as “one of the top five high-tech fixes to infrastructure.” It was also awarded first prize in innovative design by the American Society for Heat, Refrigeration and Air Conditioning Engineers.

With the sobering knowledge that “more women die every year from the consequences of osteoporosis than from breast and ovarian cancers combined,” Bishop’s University professor Estelle Chamoux enlisted a team of undergraduate researchers in the science department to help her answer the following question: could everyday stress be a contributing factor in osteoporosis? In an attempt to form an answer, the faculty-student partnership will recruit a team of volunteers and evaluate both their stress and blood levels simultaneously.

Professor Yu-Ling Cheng is the leader of the Centre for Global Engineering at the University of Toronto, where, with the help of her undergraduate students, she is reinventing the toilet. (The University of Toronto was the only Canadian school to receive a grant from the Bill and Melinda Gates Foundation “Reinvent the Toilet Challenge”). With the prospect of fulfilling the basic sanitation needs of the developing world, Cheng and her team are building what they call a “magic toilet”—one that doesn’t rely on running water, sewage systems, or electricity. It does, however, cost five cents per use.*

English undergrad John Watson and art history and communications professor Darin Barney are researching how technological transitions affect small communities—and the Prairies in particular. According to this student-professor team, the impending demise of the grain elevator doesn’t only take rural Canadians some getting used to; it has profound political consequences as well. “Grain elevators are treated as both a site and a medium of political organization in Prairie communities,” they argue.

Fourth-year student Alexandra Petre got a chance to research her favourite discipline—history and political studies—as part of the Queen’s University Undergraduate Student Summer Research Fellowship (USSRF). Under the tutelage of history professor Tim Smith, Alexandra examined “the changing meaning of welfare” as it relates to British immigration policy and migrant rights over a 30-year period; an especially timely topic in light of this summer’s U.K. riots. Under the same fellowhip, undergrad Irfan Tahiri began a historical project with his professor, Dr. Ariel Salzman, called “Remembering Afghanistan of the 1970s,” in hopes of educating people about a pre-war Afghanistan, a country, says Irfan, that wasn’t always associated with war.

Melvyn Goodale, the director of the Centre for Brain and Mind at UWO, is currently aiding several undergraduate students in the research process for their fourth-year honours theses. As the Canada research chair in visual neuroscience, Goodale and his students—in collaboration with other faculty members—focus on vision and perception, as well as examining the role of eye and hand movements in adjusting perceptions in size-contrast illusions.

The Undergraduate Research Opportunity Program (UROP) at U of O gives students research experience in the discipline of their choice and one-on-one collaboration with a professor. Biology undergrad Natascha Lacroix, for example, researched stem cell pathways with her professor, Dr. Qi Li, who gave her step-by-step instructions on how to conduct a formal scientific experiment—knowledge she says will be invaluable in graduate school. And UROP isn’t limited to the sciences: classics student Alison John recently worked on a paleography project alongside her instructor, translating and recreating medieval Latin texts.

Brent Lee likes to engage his undergraduate students in unconventional ways. The University of Windsor music professor is fascinated by the relationship between sound and image, something that’s fuelled a large part of his collaborative research. With the help of Windsor’s Scanning Electron Microscope, or SEM, Lee and his students mapped the sonic gestures of live musicians (also members of his experimental music group, the Noiseborder Ensemble) onto a video screen where they could literally see the sound. What emerged was a composition he calls “Particle Zoo.” They’re currently gearing up for a similar science project in 2012.

When fourth year Science and Health Promotion major, Robyn Waite, wanted to know which Canadian university had the healthiest student body, she thought looking at her own school—Dalhousie University—would make for a good start. She’s now completing her honours thesis “on the quality of life of the Dal student body.” Robyn is using the World Health Organization’s Quality of Life (QOL) brief scale to assess the health levels of the student population. Her findings so far? “Students,” says Robyn, “tend to rate poorer on numerous health measures than the general population.” Increased stress and risk-taking behaviours factor large.

The Brain Repair Centre at Dalhousie University is home to the world’s first successful “virtual brain surgery.” In 2009, neurology professors created an identical computer model of a patient’s brain using magnetic resonance imaging (MRI) and fed it into an intricate simulator called “NeuroTouch.” This enabled neurosurgeons to perform a virtual surgery on the patient’s brain, as a means of practice, to troubleshoot any problems they might run into. Dalhousie professor Dr. David Clarke (a member of the original Brain Repair Centre team) believes the new technology has revolutionized the teaching process in his field, allowing students to attempt more complicated, hands-on techniques.

3M Canada and the Society for Teaching and Learning in Higher Education (STLHE) have created a unique awards program that will give $5,000 annually to 10 full-time Canadian university undergraduate and college students. The award recognizes outstanding leadership qualities and achievements in advancing student learning.

Since 1986, 3M Canada and STLHE have recognized university teaching through the 3M National Teaching Fellowships. This new student award, in addition to providing students with financial aid, will allow them to be part of a unique learning community. Says STLHE president Arshad Ahmad: “The Student Fellowships are the first in Canada to build community among visionary student leaders whose voices will shape tomorrow’s future in post-secondary education.”

In addition to the $5,000 cash award, each of the 10 winners can attend the annual STLHE national conference (cost of travel and accommodation is covered), meet their fellow winners to share ideas on issues that matter to them and, if they choose, develop a collaborative project to enhance teaching and learning at the post-secondary level.

For information on criteria and application procedures go to: www.stlhe.ca/3m-national-student-fellowships/ Submission deadline is Jan. 7, 2012.

*This article incorrectly referred to Professor Yu-Ling Cheng as “he.” It was corrected Nov. 9. We regret the error.