Even when shown that it's unhealthy, students pick bad food 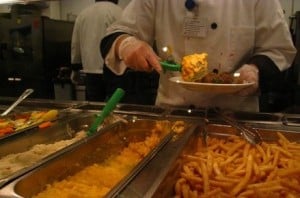 Sorry dietitians, but a new study says that showing students how unhealthy their food is won’t change what they eat.

“Although it is important to inform consumers about the nutritional characteristics of the food offered, providing nutrition information in less healthy food environments is unlikely to alter consumers’ food choices,” researchers Christine Hoefkens and Wim Verbeke told Reuters.

Their study at Ghent University asked 224 students who regularly ate at the university’s cafeterias to log their diets for several days. Then, without participants’ knowledge, the researchers started putting up posters that showed how health meals were, using a three-star rating system (one star for the worst meals and three for the best) and warnings about high salt, calories and saturated fat content.

Six months later, the participants, once again logged what they ate. The posters didn’t change a thing. Students ate the same amount of bad food and no more good food than before.