One of the best parts of university is… 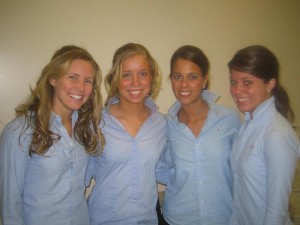 There are lots of reasons why university is a million times better than high school. Never mind all the obvious ones, like the fact that the courses are way more interesting, or that you have more control over your marks. When I started my first year of university, a nice bonus that I didn’t expect: you don’t have to worry about what you’re wearing.

In high school, everyone wears a uniform. Sure, there are a couple variations of this “uniform.” And certain styles go in and out of popularity. But the High School Uniform is partly why distinguishing between two 15-year-olds is more difficult than making a Jurassic Park 4 with an original plot. Meaning, something that doesn’t involve a bunch of archaeologists wandering around a tropical island and getting eaten one by one, except for the main character wearing a fedora.

That’s why it’s kind of ironic when high school students get in an uproar about actual school uniforms. They’re all wearing the same thing, anyway.

University is completely different. When you’re sitting in a lecture hall with hundreds of students, nobody is paying any attention to you.

Or what you’re wearing.