With next week’s strike vote deadline approaching for Ontario college faculty, hundreds of thousands of the province’s college students prepare for what could be an unwelcome extended holiday.

Full-time professors, counselors and librarians, roughly 9,000, represented by the Ontario Public Service Employees Union, will vote Jan. 13 on giving their bargaining team a strike mandate if a deal cannot be reached.

The results of a strike for 500,000 college students (350,000 full time students and 150,000 part time students) would mean canceled classes, and could mean the extension of classes into summer, or a canceled term if the strike continues well into the four-month semester.

As most students pack their bags to go back to class next week, many are left holding their breath, while some plan demonstrations of their own.

Graeme McNaughton is the creator of the Facebook group ‘Ontario College Students Against A Strike,’ which has over 18,000 members. The petition linked to the group has been signed by more than 3,000 students.

McNaughton started an event called the ‘All-Ontario Student Walkout‘ set for Jan. 12, the day before the strike vote, and student groups have begun to sign-up to participate.

The last major academic strike happened at York University in Toronto where the union for the school’s contract faculty, teaching, graduate and research assistants participated in a 12-week standoff, affecting 50,000 students.

Metro Ottawa spoke to a professor at Algonquin College, one of 24 colleges involved in the collective bargaining, about the possibility of a college-wide strike.

“It doesn’t mean there will be a strike, but it does mean that one is possible,” Rod Bain told Metro. “Unfortunately, it is something that we pretty much need to do in order to move management toward a settlement.”

In 2006 the strike fell just a month before the end of the second term and lasted 21 days, leaving those slated to graduate or to start jobs or work placements scrambling to catch up.

The OPSEU said that in the past when faculty have given the union a strike mandate and subsequently gone on strike, results of bargaining were “significant.”

They also said in another note that students benefit from the union’s conditions, which have included “changing learning environment of students, as well as looking for ways to deal with the increasing number of students attending college.”

Bain told Metro, this time around, professors are asking for a 20 per cent increase in paid time to prepare for classes or to meet with students outside of class time. 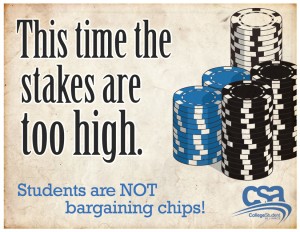 However, not all college faculty are on board for a strike. A website authored by William Tenant, a business professor at St. Lawrence College, has cropped up, dedicated to encouraging faculty to vote ‘no’ to a strike mandate next Wednesday.

The College Student Alliance, which represents over 70 per cent of Ontario college students wrote an open letter entitled ‘College students are NOT bargaining chips.’ In it CSA president Justin Fox said: “Students are concerned with the fact that, yet again, there is a threat of a province-wide faculty strike looming over their education.”