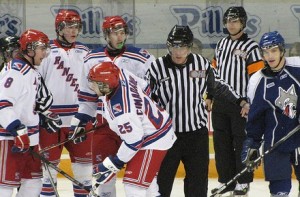 The Kitchener Rangers, an Ontario Hockey League team, is suing a Michigan student newspaper, a journalist and his anonymous source for $1-million over what they say are false allegations about promising to pay a top player $200,000 to join them instead of the Wolverines.

The Rangers drafted Michigan native Jacob Trouba, 18, in the third round of the 2010 OHL draft. He’s slated play for the University of Michigan next season on scholarship, but was picked ninth overall by the Winnipeg Jets in last month’s NHL draft and is currently in the team’s rookie camp.