Ontario student demands to be served... in English 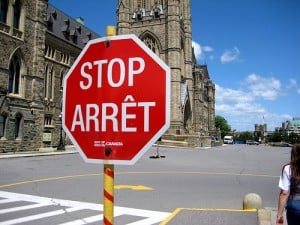 French-only signage at the bilingual University of Ottawa has caused debate on The Fulcrum’s website. Anglophone student Jaclyn Lyte writes that at an on-campus sub shop, employees have practically given up on English, with French-only signage. “Call me crazy, but I think it’s important for students to be able to make informed choices about what they eat,” she writes. “I shouldn’t have to grapple with francophone food workers and hold up the line for 15 minutes just to find out what I’m eating.” Lyte supports billingualism. “I’m content to listen through French messages first, and I won’t complain if I have to scroll down an extra page or so to get to my English message,” she says. But she draws a line French-only lunch.

In the comments section, students show their frustration at the school’s official bilingualism. “This school is so French biased,” comments ‘Nick.’

But ‘Julie-Anne Lapointe’ says frustrated Anglos should quit complaining and learn French. “Think about all the times we, French people, have to read a label in English because there is no french translation (and yes, this happens all the time at the U of O),” she adds. “Well, we deal with it.”

It’s a debate that’s happened at the school for decades. The Ontario government made bilingualism official at the school in 1974 with  An Act respecting Université d’Ottawa. UOttawa has had a mandate to “further bilingualism and biculturalism and preserve and develop French culture in Ontario.” It must show its bilingualism in “programmes, central administration, general services, internal administration of its faculties and schools, its teaching staff, its support staff and its student population.” The Act says nothing explicit of sandwich shops. Expect more debate.