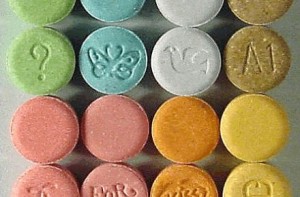 A 23-year-old University of Western Ontario student who attended a concert in Guelph on Nov. 23 died of an apparent reaction to ecstasy pills, reports the Guelph Mercury. The Sarnia, Ont. native was taken to a Guelph hospital at 2:30 a.m. and died of organ failure on Nov. 26 in Kitchener.

Last week, a 16-year-old in Calgary died after taking what appears to have been ecstasy.

The drug most commonly sold as ecstacy is MDMA (3,4-Methylenedioxymethamphetamine), which floods users with euphoria and a sense of empathy. MDMA itself rarely causes sudden death. However, the brightly-coloured pills sold as ecstasy come from drug labs where they’re sometimes laced with more deadly drugs. U.K. Professor David Nutt published a study in the Journal of Psychopharmacology in 2009 that suggested the risk of death from ecstasy use is similar to the risk of death from horseback riding.

But MDMA poses other health serious risks. A study published Monday in the Archives of General Psychiatry found that healthy female ecstasy users aged 18 to 25 show signs of brain damage. Other studies have linked long-term ecstacy use to memory loss, anxiety and depression.