Ontario students to "walk out" Tuesday

College students plan to meet in protest of collective strike 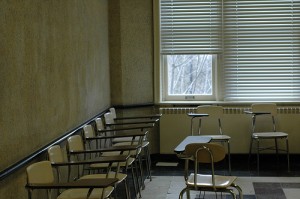 At noon Tuesday, Ontario college students have confirmed they will “walk out” of class, the day before Ontario Public Service Employees Union employees are set to vote on a strike mandate.

The “All-Ontario Walkout” is organized by Humber College student Graeme McNaughton, creator of the accompanying Facebook group “Ontario College Students Against A Strike.”

According to the event page, the plan is for participating students to walk out of their respective classrooms and meet at a designated location where copies of a petition protesting the potential strike will be available for them to sign.

These petitions will then be brought to bargaining parties, both the union and school administrations.

Twelve schools already have designated meeting places, some with locations at more than one of their campuses. So far 277 have confirmed their attendance via Facebook, which has more than doubled from last week’s “Attending” count of less than 100.

The OPSEU represents roughly 9,000 full-time professors, counselors and librarians. Both faculty and student alliances have opposed a potential strike, arguing time away from school would have a negative impact on the quality of education.

The last time Ontario colleges went on strike was in 2006, where a 21-day strike at the tail-end of the second term left students scrambling to catch up on schoolwork in order to graduate, and maintain summer employment or other workplace opportunities. The OPSEU has argued that voting ‘yes’ to a strike mandate does not necessarily mean a strike, but would provide the leverage the union needs at the bargaining table to achieve the settlement they seek.