Hudak would manipulate students through loans 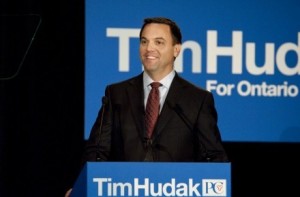 Hudak (Office of the Leader of the Opposition)

The conservative Ontario PCs have released a new policy paper on higher education. Amid the usual boilerplate rhetoric that conservative politicians trot out on such occasions was this little gem regarding student loans:

Decisions about who should receive loans and how much money is to be awarded should involve assessments of future employability and reward good academic behaviour. Rewarding good behaviour means not only making the smart and efficient choice about where to go to school, but also keeping students accountable for how they choose to spend the money the government is lending them. To maintain aid, students must demonstrate a minimum level of academic success. Too often, our loans and grants programs reward mediocrity.

It takes a while for the magnitude of what is being proposed here to hit you. When it does, you realize that the PCs are proposing twisting the student loan system into a bureaucratic nightmare of nearly Orwellian proportions.

For one thing, the implication seems to be that students will only be able to keep their loans if they maintain a “level of academic success” that exceeds “mediocrity.” The clear implication is that students will have to earn high grades (C’s and D’s and sometimes even B’s are mediocre at some schools) to keep their loans. This, in itself is a mild outrage since these same students are going to have to pay all this money back, with interest. And yet the right to be deeply indebted for years has to be earned with top marks?

But it doesn’t stop there. Loan recipients will, according to this document, not have free choice over which schools they attend. Instead, they will have to make a “smart and efficient choice” of schools which seems to imply the least expensive choice—perhaps not even a university, since the report also urges the government to steer more students to community colleges. Never mind your hopes and dreams—if you want a loan in Tim Hudak’s Ontario, you’re going to have to study where he says you can study.

And that’s not all. Since “assessments of future employability” will also be part of the process, this proposal may see the government decide what you get to study, too. Poor Ontario students may end up like Dickens’ Oliver Twist begging for another bowl of gruel:  Please, sir, may I have another course?

The worst part of all of this is that it promises to exacerbate the inequities already inherent in our current system of high tuition fees and high debt loads. As it is, better-off students can graduate with the freedom that comes with being debt-free, while poorer students have to bear the weight of tens of thousands of dollars in loans—loans that take a whopping fourteen years to repay, on average.

In the proposed system, that inequity gets added to the front of the system too. Rich students can study where ever and whatever they want because they don’t have to rely on student loans and won’t be monitored for “good behaviour.” The less fortunate must study at the whim of bean-counters and bureaucrats who grimly pronouncing on what is an “efficient” educational choice.

Though we would all be better off if students didn’t need loans at all, the existing loan system at least has the modest virtue of giving students options and choices they might not otherwise have had.

Let’s not let a half-baked education plan take those options away from them.