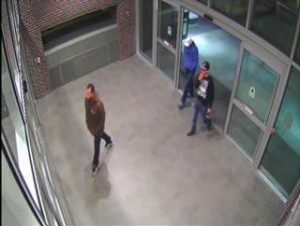 Ottawa Police are looking for information after at “swarming” at Carleton University. They write: “On Saturday September 28, 2013, at approximately 1:10 am, a male victim, age 22, was leaving Oliver’s pub and was exiting the Unicentre building when he was accosted by three male suspects. The victim was forced to the ground and assaulted. The suspects attempted to obtain the victim’s phone but ultimately fled with only some keys. The victim sustained minor injuries that did not require medical attention.” The suspects are described as Middle Eastern males aged 18 to 25. One was 178 cm, unshaven and wearing brown hooded sweatshirt and dark pants. A second was 173 cm and wearing a blue hooded sweat shirt, white baseball cap and jeans. A third was 183 cm and wearing a black shirt and black baseball cap.