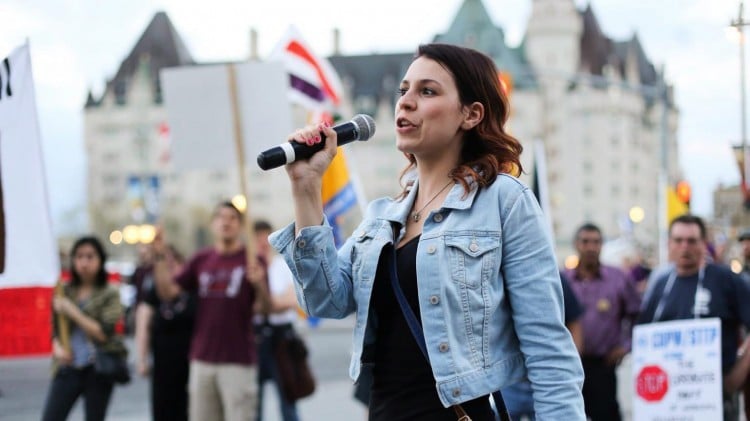 TORONTO – A student union leader at the University of Ottawa says an online conversation among five fellow students in which she was the target of sexually graphic banter shows that “rape culture” is all too prevalent on Canadian campuses.

Anne-Marie Roy, 24, is going public despite being threatened with legal action by four of the male students, who say the Facebook conversation was private.

Nonetheless, Roy — who received a copy of the conversation via an anonymous email — said she felt compelled to speak out, especially since the five individuals were in positions of leadership on campus.

“They should be held accountable for those actions. Actions have consequences and I think that this is certainly something that can’t go unnoticed,” said Roy, who heads the Student Federation of the University of Ottawa.

“Rape culture is very present on our campuses…I think that it’s very shameful to see that there are student leaders who are perpetuating that within their own circles.”

The incident was first reported in the Fulcrum, the university’s English language student newspaper.

Roy said she was sent screenshots of the Facebook conversation on Feb. 10, while student elections were being held on campus.

“Someone punish her with their shaft,” wrote one of the individuals at one point. “I do believe that with my reputation I would destroy her,” wrote another.

After confronting a member of the conversation in person, Roy said she received an emailed apology from all five men which emphasized that their comments were never actual threats against her.

“While it doesn’t change the inadmissible nature of our comments, we wish to assure you we meant you no harm,” the apology, written in French, read.

“We realize the content of our conversation between friends promotes values that have no place in our society and our campus, on top of being unacceptably coarse.”

“I was very torn up by the conversation,” she said. “I also think there needs to be a level of responsibility taken for the words that were said in that conversation.”

Roy decided she would bring it up at a Feb. 23 meeting of the student federation’s Board of Administration, which oversees the affairs of the student union.

Her plan was to distribute copies of the conversation to the board’s members while asking the board to move a motion to “condemn” those who engaged in the discussion, two of whom were board members. The other three were involved with organizing campus events.

After learning of Roy’s plan, four of the five individuals sent her a letter warning her that the conversation was a private one and that sharing it with others would amount to a violation of their rights.

After consulting with a lawyer, Roy chose to go ahead with sharing the conversation with the board, but received a cease and desist letter during the board meeting.