Keith Robinson on his surprising findings 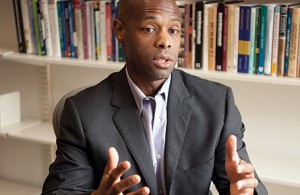 If there is a single pillar of unchallenged, conventional wisdom in education theory, it’s that parental involvement is the key to a child’s success in school. Certainly, University of Texas professor Keith Robinson had no doubt about it when he and fellow sociologist Angel Harris decided to investigate exactly how that involvement played out. But not after plowing through the rich data provided by the U.S.’s National Center for Education Statistics (surveys of 25,000 students) and Child Development Supplement (family questionnaires). The effects of parental involvement in schooling, write Robinson and Harris in The Broken Compass, are mostly inconsequential—sometimes even negative.

Q: This wasn’t the result you were expecting, was it?

A: I have to say I certainly was surprised, given the view of the public and the government. There is such an overwhelmingly positive sentiment toward more parental engagement, even dating back to the ’70s. And a good deal of federal dollars is spent promoting it. But things jumped out at us. Affluent children with good academic success do have involved parents, it’s just that that’s not the reason they have success. The relationship of parental involvement at the school—which varies greatly over racial and especially economic groups—never yielded positive estimates even one-third of the time. At home, where the class and racial differences are narrower, it was a bit more positive. Overall, only approximately 15-20 per cent of the involvement was positive, roughly 30 per cent negative and the rest statistically insignificant. A big surprise was that Asian-American parents—the model minority whose kids are doing so well in school—hardly did any of these involvement measures, another thing that sort of flipped conventional thinking on its head.

Q: Do you think we believe parental involvement is absolutely key because we want it to be true, because it’s something within reach that would help level the social-class playing field?

A: I would agree with that, but we don’t understand the ways in which parents matter. We looked at 63 measures of parental involvement that we found collectively in all the existing research, from returning calls schools made to the home to volunteering in class, and we put these to the test. What we found was that very few actually matter. Effective parental involvement might, in fact, be in reach, but we are stuck in conventional ways of thinking about parents’ roles. What we need in this country is the next step—explaining to educators and parents that parents matter on a much more intangible, abstract level. That has to do with their effectiveness in communicating to their children how essential education is to the kids’ lives. What’s ironic to me is that even though we went through a ton of analyses and ended up showing that most involvement was unimportant or negative, what I came away thinking was that parents actually do matter. They do matter.

Q: You mean because there are twice as many negative effects?

A: Yes, learning that not everything parents do is helpful for their kids. I really don’t know if the public is ready for this one, but there are actually some ways parents can be involved in their kids’ education that leads to declines in their academic performance. In fact, one of the things that was consistently negative was parents’ help with homework.

Q: That one is really counterintuitive. And it’s negative across all race, class and age groups. Why?

A: It’s tough to say. One thing I would speculate is that parents are probably helping the best ways they know how, but they have not located what’s most effective for their own child. And as kids get older—we’re talking about K-12 education—parents’ abilities to help with homework are declining. Even though they may be active in helping, they may either not remember the material their kids are studying now, or in some cases never learned it themselves, but they’re still offering advice. And that means poor quality homework.

Q: What parental involvement is helpful?

A: The most consistent, positive parental involvement activity is talking to your kids about their post-high school plans, and this one stood out because it was, pretty much for every racial, ethnic and socio-economic group, positively related to a number of academic outcomes—such as attendance and marks. What this might be hinting at is the psychological component that comes from kids internalizing your message: school is important. It may be with these conversations parents are connecting kids’ current education—whether their children are in Grade 2, Grade 3 or high school—to a future, and the children are able to see that bridge. That finding was the most significant.

Q: What else is there, in a positive sense?

A: Reading to your child before the school years is one of those things that’s always a good idea. It’s one of the parental involvement activities that also has to do with language development, and you’ve got a number of other studies that talk about kids who are very young and sort of just hearing language from their parents, how that promotes brain development and increases vocabulary which increases ability to learn.

Q: As a member of a visible minority, can you personalize what you’ve learned, look back on how your parents helped you on the way to becoming a university professor?

A: My father was a stickler for education. When I would get home he made sure the first thing I did was my homework, and he would be concerned with little things such as making sure I erased very clearly, you know, just the tiny details, then asking me how my day was. It had a psychological effect on me because I understood that my education was important to him, and I trusted him. My mom was a little different. I realized that she loved me but she was not a stickler for education. But she was proud of me in education as well. All that had a positive effect—I knew they supported me in everything I did and they were proud of me when I did well educationally. That put me on autopilot. I didn’t need my parents’ involvement in every aspect in my education; I was able to do well in the classroom because I had internalized the message.

Q: What about involvement negatives? There’s homework help and what else?

A: Punitive involvement. That one was interesting because the way parents responded to the question in the data set tended to differ across class and racial lines. The question was, “How would you respond if your child was bringing home performance that was inadequate?” We found that whereas whites appeared more inclined to intervene in non-punitive ways—making sure there was space and quiet for homework, for example—black parents appeared more inclined to respond punitively, like taking away privileges. And the problem was that overall among those in the data set punitive responses had a negative relationship with how well the kids did in school in the future. That meant black parents were doing more of what was bad for their kids. Of course, not intentionally or consciously, that’s just the way it tended to go.

Q: That was one of the cases where non-involvement was better than involvement.

A: A different type of involvement would certainly be better. But a key takeaway from that is that even though those parents were responding unhelpfully, it shows educators that they shouldn’t assume that black parents are less concerned with improving achievement outcomes than whites, which they do tend to assume in the U.S. These parents are responding to a problem. We need to get past the homework and the volunteering and the PTA meetings to the more abstract level where parents actually affect their kids’ education outcomes.

Q: That brings you to the question of what the Asian-American results say about the nature and effectiveness of parental involvement.

A: For the future, what we really need to figure out is how we can inform the variety of parents out there how they can best communicate to their children that schooling is important. Parents differ—there are vast cultural, socio-economic and socio-demographic differences in their backgrounds and circumstances—so how do we customize our advice? The same thing is not going to work for everyone. I actually think Asian Americans—I’m generalizing, but on average—Asian Americans might be doing the best job of communicating this compared to all the rest of us.

FILED UNDER: Keith Robinson The Interview