Poetry doesn't have to suck. Who knew?

“I once knew a boy, he liked eating rats. His name was Roy, he also ate cats.”

If I made a list of the Top 10 Most Inefficient Ways to Spend my Summer Vacation, attending a poetry reading would probably sit somewhere around #2.

Followed by #1: Watching every single episode of Corner Gas in a row. With my eyes open.

Either way, I recently found myself in my younger brother’s school, listening to his grade five class use words like “Haiku,” and “Iambic pentameter.”

And I actually enjoyed it.

When a grade five class reads poetry, there isn’t anything contrived or pretentious about it. For instance, my favourite poem, by Jake:

Some students had a lot to say about their siblings. Alex’s poem was about his younger brother: “…Got angry at me, and then he kicked me in the knee.” Kenan’s was about his, “…crazy little sister… like a living twister.”

Abdul poetically described his entire family: “My brother is a weird kid,” and “My father’s name is Bigfoot, my sister’s name is Yeti.” 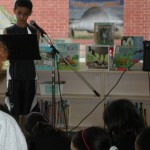 “Once I saw a person with a bat, hitting a cat.”

“I’d rather be one than none.”

“…don’t change a thing, except your clothes.”

“If I eat chocolate, I lose a little hair. It’s just unfair.”

“I once knew a boy, he liked eating rats. His name was Roy, he also ate cats.”

“I’m not dumb, I’m definitely not a hairy bum.”

Their teacher, Mrs. Cain, says she gave the students free rein over the poetry. I believe her.

After listening to the entire class’s poetry, and the other grade five class as well, I was really impressed. It inspired me to write my own haiku, which I dedicate to all the grade five students of Williamsburg Public School: 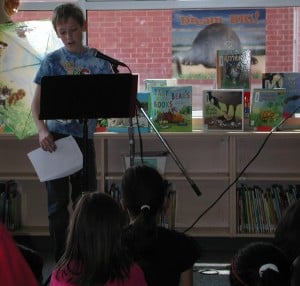