Rabbit traps tampered with at UVic 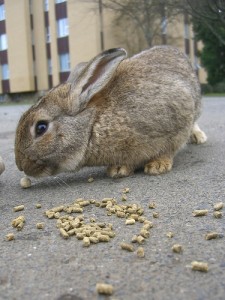 Nothing says “take me seriously” like vandalism and crying.

Police were called to the University of Victoria Monday after the university accused rabbit activists of overturning traps and spilling bait. The traps are part of a UVic initiative to live-trap and euthanize rabbits in order to stall a campus infestation.

Kathleen Terrio, an English teacher with the continuation education program, admitted to calling members of the Coalition for the Ethical Treatment of UVic Rabbits after noticing the traps. “One teeny-weeny, cutest little baby I recognized was in one of the traps and I asked if I could please take him home, but they wouldn’t let me,” she said to the Times Colonist.

I don’t like the idea of rabbits being trapped and euthanized either. Especially since alternatives have been proposed, such as Victoria veterinarian Nick Shaw offering to vasectomize rabbits for free. But kicking and swooning? Counterproductive, and frankly, embarrassing to those of us who like to call ourselves animal rights activists. If rabbit-defenders want the university to deal with the issue responsibly, they need to behave responsibly as well.

FILED UNDER: Coalition for the Ethical Treatment of UVic Rabbits rabbits University of Victoria