Police crack down on drinking at UBC beaches

Students and prof want RCMP to leave them alone 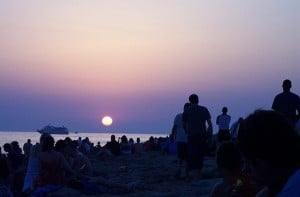 Students — and at least one professor — are disappointed that the usually laissez faire campus hangout Wreck Beach is being targeted by the University of British Columbia’s RCMP officers.

“Invariably, the people who cause trouble on the beach are drunk people,” Corporal Robert Ploughman told the Ubyssey, explaining the recent crackdown. “When the weather’s good, we’re giving out ten to fifteen, twenty tickets a day,” he said, referring to $230 open alcohol fines. He says the tickets are justified because alcohol causes fights, plus falls up the steep stairs to campus.

Carellin Brooks, a UBC professor and author of the book Wreck Beach wishes the police wouldn’t ticket drinkers. “Last night I had a bottle of wine on Wreck Beach and I did not drive drunk, set fire to any cars, or have to be hospitalized,” she told the Ubyssey, pointing out that Europeans often enjoy alcohol in public places without police interference. “Wouldn’t it be wonderful if we could take the same approach at places like Wreck Beach, rather than be punitive with everyone?”

Others feel the same way. Corporal Ploughman said he sometimes gets a standing ovation when he exits the beach.