Q&A with a professor after his outburst 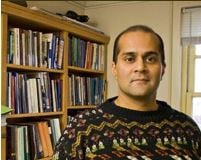 At a recent lecture on democracy at St. Thomas University in Fredericton N.B., Globe and Mail columnist Jeffrey Simpson asked a room full of journalism and political science students why young people don’t vote. A journalism student raised her hand and said it’s because the political system is complicated and many don’t understand it. Shaun Narine, an associate professor and international relations researcher, blurted out that she should, “Read a book for God’s sake!” Some clapped. Some were angry. Jane Lytvynekno spoke to Narine over the phone from Ottawa.

I was as surprised by my outburst as anybody else. I was listening to the student speak and I became increasingly frustrated with the fact that she seemed to be saying that she did not know anything about politics. It wasn’t the arcane facts [she didn’t know]. It seemed to be the most basic things like what does it mean to vote? What is Parliament? All those sorts of things. My frustration was very great. I guess I felt that this was the sort of stuff that every responsible citizen should know. … Out of that frustration I ended up doing something which I sincerely regret doing. I apologized to the student. … I sincerely believe academia is a place where we should have rational and reasonable discussion. I don’t believe in heckling people and I don’t believe in embarrassing students and I don’t believe in screaming at people in frustration and in all of those respects I certainly did not live up to my own standards or expectations.

You said you regret your outburst but do you stand behind the message?

Very much so. What I did was wrong for a variety of reasons. On the other hand though, I think the reason for my frustration was valid. I don’t want to justify myself. I genuinely felt like an ass. But I’m not going to pretend that I don’t feel strongly that our students, and Canadians in general, need to know enough about their political system that they can participate in it in a meaningful way.

Why is it important for youth to know how the political system functions?

All around the world there are people literally dying to have some sort of say in how they are governed and yet in Canada it seems so many of us take it for granted to such an extraordinary degree that we don’t know anything about the way we are governed. I very strongly think we get the kind of democracy we deserve. There are all kinds of reasons why democracies don’t work and shouldn’t work. … The system works best having an informed, intelligent and responsible public. … Ultimately if you make foolish decisions or vote for somebody for foolish reasons everyone suffers as a result. … In 2011, [Prime Minister Stephen] Harper was able to convince many Canadians that an opposition effort to form a joint coalition government was somehow a run around democracy and an attempt to do something by stealth or by cheating that they couldn’t do in an election. Of course, in parliamentary democracy, coalition governments are completely ordinary. There’s nothing cheating about it at all. It happens all the time. It’s the way the system is designed. … You see this sort of thing all the time. People don’t understand the system under which they are operating but they’re being asked to make decisions and you can end up with potentially disastrous results.

Why do you think young people are not as interested in politics as older people?

It’s a difficult question to answer. In general young people have often in the past been disinterested in politics. If you look at the 1960s and the 1970s that may have been more an exception to the rule than the rule itself. But I do think that there seems to be a stronger level of apathy today and I’m not entirely certain why. … In the United States there’s a general idea that the government can’t accomplish anything and they [the citizens] had to become more and more reliant and skeptical of government capability. I wonder if some of that malaise has drifted across the border and Canadians have started to feel that the government cannot accomplish much and therefore getting politically involved does not make much sense. … That’s a possibility but I don’t think young people have thought it through that much. They grow up in an environment where they are disengaged. They are not given a reason—or more accurately they didn’t find a reason—to be engaged. … I don’t know the answer but I do know that it’s happening and I know it’s harmful to our democracy.

Learning to govern yourself and making important decisions is difficult but it’s something we have to do. … We go about our lives and we have our distractions. … People are on Facebook, television, watching movies and are being distracted in a wide variety of ways. It’s not like the time isn’t there, people are just not using it to get informed or better informed. … All of this matters because politics is difficult, governing is difficult and doing it well is difficult. If we don’t have an informed public we have something like the United States going off to war on the basis of a misled public.

How do we fight youth apathy?

I thought that some of the things around the Occupy movement were encouraging. It was young people who were out there in the job market realizing for the first time that they were unemployed or underemployed and their prospects didn’t look very good. … Admittedly this was people being motivated by self interest but I thought that was hopeful because to me it looked like the beginnings of young people recognizing that they needed to be politically engaged in order to make a better future for themselves. I suppose one way they could be less apathetic is if it’s clear to them that they actually can have an impact on events and it’s in their interest to shape those events.

Motivated to “read a book” about politics? Narine recommends visiting the Parliament of Canada website for the basics and then checking out The Ugly American and The Foundation Trilogy.