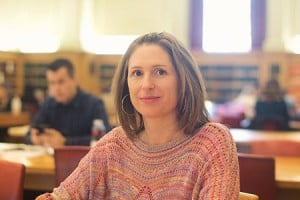 Photo courtesy of University of Alberta

Early on, professor Toni Samek asks her students this question: Is homelessness a library issue?

Students entering the Master of Library and Information Studies program at the University of Alberta, where Samek has taught for 18 years, come from fields as diverse as nursing and law.

They arrive not knowing what to expect.

But after the homelessness question, students forget their stereotypes about meek librarians.

Samek is one of 10 new 3M National Teaching Fellows who have agreed to share their secrets to successful teaching with Maclean’s.

Samek is anything but meek. In fact, she sees herself as an activist in a radical profession.

It’s no surprise, then, that her teaching is grounded in the idea put forward by scholar Henry Giroux that a good education is one that is constantly engaged with public life.

Homelessness is an issue in the public sphere that illuminates the core values of Library and Information Studies. It’s related to literacy and diversity, which are both values that librarians proudly uphold, along with intellectual freedom, democracy, access, life-long learning and more.

So is it a library issue? Samek thinks so. “There are not a lot of places in the community where a homeless person can go and have Internet access, read the newspaper, sit down and have quiet time or use the washroom, because we have so much criminialization of the poor,” she says.

But her goal isn’t to convince students of the right answers. They’re welcome to come to different conclusions—so long as they’ve wrestled with the question and argued from multiple perspectives.

Another example of how Samek encourages students to engage is through discussion of labour disputes, which are often political minefields. Strikes happen (like at Western University recently), lockouts happen (like in Victoria, she points out). “It’s okay to talk about,” she insists.

Another opportunity to connect her classroom to public life came during the 2010 Olympics. Samek had students examine corporate sponsorship through the eyes of a Vancouver librarian. “It might be frustrating for them,” she says, “because [librarians] have a commitment to intellectual freedom.”

Copyright is the current hot topic. Some universities have signed agreements with Access Copyright that make academics cringe. It’s ripe fodder for Samek. “Any number of us may be working in an institution where we disagree about the copyright issue,” she tells students. “It doesn’t mean you’re going to go and quit your job,” she adds, “it means you’re going to be engaged.”

Engagement is the goal of Samek, the teacher and activist.

“I tell my students that most librarians aren’t going through their days thinking of themselves as activists or that they’re participating in a radical profession—nor do they need to,” says Samek.

“But,” she adds, “there are not a lot of groups in society that do what public librarians do.”