Get off that iPhone (or else)

U Ottawa considers policy on tech toys in class 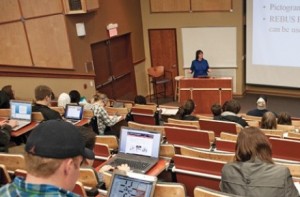 A University of Oklahoma professor became famous two years ago when he dunked a laptop in liquid nitrogen and violently slammed it into the floor of the classroom to get his point across: “Don’t bring laptops and work on them in class.”

The stunt was followed by similar demonstrations by profs angry over noisy and distracting electronics. One took a sledgehammer to a fake phone. Another enforced his “strict policy about texting” using a simpler solution: a glass of water.

Clearly professors are frustrated. That’s why the Senate at the University of Ottawa is considering a proposal that would allow them to limit the use of portable music players, laptops and phones.

Christian Detellier, interim vice-president academic and provost, told The Fulcrum that the policy is needed so that students will respect each other. But Liz Kessler, vice-president of university affairs for the student federation, says students deserve to be treated like adults.

This is not the first time bans of electronic devices have been considered. Such a proposal created controversy at McGill University back in 2010.

The University of Waterloo has a policy that explicitly states professors may not ban laptops.

So it will be interesting to see if the Ottawa policy passes. But if it doesn’t, don’t be surprised to see more professors take matters into their own hands—and maybe even smash them into the floor.