Put down that breakfast sandwich 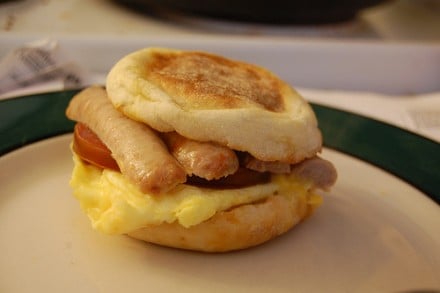 You may love fast-food breakfast sandwiches. But new Canadian research suggests your arteries do not.

A study done at the University of Calgary shows that even in healthy young volunteers, these high-fat meals have an almost immediate—though temporary—effect on the functioning of blood vessels.

Scientists at the Libin Cardiovascular Institute tested what they call the “happiness” of blood vessels after volunteers ate two breakfast sandwiches, comparing the results to controls who didn’t have the meal.

They measured the velocity of blood flow to the subjects’ arms before and after the volunteers ate breakfast sandwiches, and compared it to what they saw in subjects who didn’t eat the breakfast.

The result? Arteries subjected to the fat in the breakfast sandwiches were not happy, said senior author Dr. Todd Anderson, director of the institute and head of cardiac science at the University of Calgary.

The flow was significantly reduced after the breakfast sandwich meal “which tells us the small vessels in the arm aren’t able to dilate as much and therefore blood flow doesn’t increase as much down the arm,” said Anderson.

He wouldn’t name the restaurant that was the source of the breakfast sandwiches, but described them as typical of that type of fast food.

The two combined contained about 900 calories and 50 grams of fat, and were high in sodium. The fat content was about the recommended daily limit for a person who weighs 70 kilograms, he said.

He suggested the findings don’t mean people should never eat a breakfast sandwich. But it does show that every choice has an impact.

“This study reminds us that our behaviours are the backbone of preventing heart disease,” Dr. Beth Abramson, a Toronto cardiologist and Heart and Stroke Foundation spokesperson, said in a press release.

“So consider all the choices and try to cut down on saturated and trans fats, calories and sodium. That’s one of the keys to decrease your risk of heart disease and stroke.”

The primary scientist on the study was a student researcher, Vincent Lee, who did the work as his honours project for his bachelor of health sciences degree. The study was presented Tuesday to the Canadian Cardiovascular Congress.