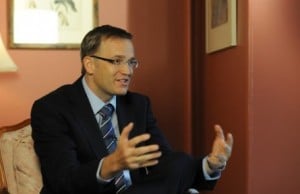 Richard Florizone, a nuclear physicist with an impressive CV that includes Cambridge University, Bombardier, the University of Saskatchewan and the World Bank, was installed last month as president of Dalhousie University in Halifax, N.S.

In his installation speech, he outlined a vision for the 21st century research university as a place where industry, government, non-profits, researchers, learners and community members collaborate. He gave this interview over the phone.

Tell me about your path to the president’s office.

I started out as an engineer and a physicist doing my Ph.D. in physics. Until I got to MIT, I assumed I’d become a professor but once I got [there] I saw that people did all kinds of things with their degrees, whether it was going on to be faculty, starting companies, working in government or in think tanks. The other thing I realized through my graduate work was that, as interested as I was in science and physics, in trying to understand the forces behind the universe, I found I was at least as interested in people and how they work together.

Is it just me or do a lot more university presidents these days have those industry skills?

I don’t have the numbers but, if it is a trend, I’d say the reason behind it is a couple things. One is a recognition these days that universities aren’t ivory towers alone anymore. We still have that function but there’s increasing recognition about the kinds of support and partnerships we require.

There are over 200 private and non-profit partners who fund the research [at Dal] … You realize the need for all those partnerships, that engagement and that understanding of different sectors of society. But it goes beyond just the money to a vision of what a modern research university is all about. It wants to exist in engagement with the rest of society. It wants to have research that might come out of the ivory tower and then maybe have some impact on the world but also engages in the world so that ideas come back from industry, government and other sectors to the university.

I know you won’t want to pick just one but could you offer one example of a partnership like that?

It turns out 75 per cent of dentists in Atlantic Canada were educated at Dal. So that’s the more traditional impact on society. But the way the teaching is done, the clinic sees [thousands of people per year]. … So by government funding our dentistry faculty we also see this impact on patients getting subsidized care while our students learn… meeting our research and teaching mission. We’re also partners in the Halifax Marine Research Institute where we have both private and public partners coming together where we have shared interests to advance oceans research.

In your installation address, you talked of the university as a place for “careful pause,” “reflection,” and “the long-term view.” Are you at risk of losing that if you enter into more such partnerships?

No, absolutely not. In fact, I see the synergy between the two. … Universities need to be market influenced rather than market driven. If you’re a pure ivory tower and very disconnected from the needs of your community, very pragmatically, not only does your teaching and research become less relevant, you actually risk losing support for your mission. If you go full tilt the other way and become entirely market driven and say, “okay, what are the labour market needs for the next five years? What are the current research topics?” then you’ll fail to build the long term. If all of our research is focused just on what’s in front of us in society, it means, when we get 10 years out, we won’t have that capacity to actually address the issues around the corner that we don’t see today.

I know a lot of parents and students these days want skills with university degrees and they want students to be job ready and to get jobs. Is it the university’s job to push back at that or adapt?

Again, the balance. I read a survey of first-year undergraduates… Around 40 per cent of them said they came to university to train for a career, so I think universities need to be attentive to that… But while we’ve got to pay attention to that 40 per cent we’ve got to be attentive to that other 60 per cent who are coming here for other reasons. I’ll give you another statistic. Upon graduation, two-thirds of Dal students say they’ve become fundamentally different people after their degree. So I think we have to do both. We need to have programs where students are focused on a specific career outcome. … We have to recognize that universities are both a training ground and also about a more transformative personal experience. Frankly, I think I’ve embodied that. I trained as a physicist and then became a consultant and ultimately a university president.

Dal recently raised $280 million, which by Canadian standards is really impressive. But in comparison to smaller, newer colleges in the northeast U.S., Dal still has a really small endowment. What’s going on there? Why don’t Canadian universities have bigger endowments?

It would be fair to say that—and it’s the same thing in the UK—Canadian schools have lagged behind [the U.S.]. … That $280-million campaign at Dal shows just such wonderful support for us and where we’re trending. That number would have been unthinkable 20 years ago.

Not only Dalhousie but a lot of universities in Canada have not had their pensions fully funded for years and a lot of provinces have stepped in and offered solvency relief. Do you think solvency relief will fix the problem? Will pension plans right themselves or will we need to see big changes?

What you’re seeing at schools that have defined benefit plans is, yeah… financial challenges. But we know employees really value those plans. I think the challenge for us as administrators is to work out, what’s the right balance here? You want to find a mix of compensation and benefits that’s competitive. It may turn out that what’s the best, in terms of attracting and retaining the best, is less on salary and more on pension. So the question of whether pensions are sustainable or not and where they’ll go has to be looked at in the context of total compensation. You may have a university that chooses to have lower salaries but has a DB [defined benefit] pension plan and everyone agrees and they choose that as a particular strategy. So I think that’s where we’re at at Dal: what’s that mix? How do we ensure we’re competitive? At the end of the day, we want to be market driven.

In terms of sustainability and where DB plans go, that’s a matter of markets. I can’t really answer that question. The question is what’s going to happen to equity markets and what’s going to happen to interest rates because that’s what drives those plans… So the challenge for all administrators is to define a set of reasonable scenarios on where the market might go, look at their plans and see if they can afford to sustain it and still remain competitive on their overall compensation package.

Since getting to Dal, what’s one thing that’s surprised you about the place?

What honestly surprised me is the collegiality of all the other presidents in the system. I came in expecting that with these 10 universities in Nova Scotia and Nova Scotia Community College there would be, sort of, competition and jockeying but instead I’ve found a great appetite for collaboration.