Quebec and students: worse than you think

Patriquin: there's a normalcy to all this Gong Show-iness 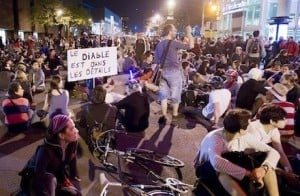 As we approach the three-month mark of the student strike/boycott/study-stoppage/what-have-you, relations between both sides could hardly be worse. An agreement in principle between the Charest government and the FEUQ, FECQ and CLASSE was roundly rejected by the students themselves, and we’ve already seen the fallout: the daily marches have for the most part resumed, much like the caustic rhetoric from both side as each accuses the other of bad faith. Yesterday, the entire Metro system was shut down after a coordinated smoke bomb attack.

Perversely, there’s a normalcy to all this Gong Show-iness, as though demonstrations, riots, street closures and metro shutdowns are part and parcel of  the coming very long, very hot summer in la bête noire province. Just like periodic language tiffs. Just like rampant corruption in the construction industry. Just like eye-bleedingly horrendous Éric Lapointe videos. (I warned you.) Ayoye.

Though it was scuttled by the students, the deal hashed out last week will likely serve as a blueprint for  any settlement between the students and the government—which will come some time in the next year, Inshallah. It includes a clause by which an ”interim council” is set up to examine university expenditures, and apply the savings (if any) to a corresponding reduction in student fees, up to $125.

Notably, the counsel was to be made up six university rectors/presidents, four student representatives, four union people, two people from the business sector, one CEGEP rep, one ministry rep, one president and, while we’re at it, René Angelil, Sol the Clown and the ghost of René Lévesque.

This needlessly complicated clause—a good Quebecer would dismiss it as a patente, or ‘thing’—was put into last week’s negotiated settlement as a way for both sides to save face. In so doing, the government has created a fearsome precedent that threatens to undermine not only this round of student/government negotiations,  but future ones as well. First off, it’s difficult to see how, once they’ve sat at the table with the rectors, unions, business leaders and government, the students would ever relinquish the perk. Essentially, there is nothing to prevent the student associations from insisting on such a council every time government raises the spectre of tuition fee increases. And rightfully so, if you ask me: no one likes to give up power once it’s been in one’s hands. Of course, Students are now fully aware of the cudgel they can wield if things don’t go their way. It’s a matter of calling a strike and waiting for the tear gas to rain down.

Secondly, the premise of the council is itself antagonistic and counter-productive. The rectors and principals of Quebec’s universities unanimously claim that the system is underfunded; conversely, the student associations say university administrations are money-wasting spendthrifts. According to the FEUQ, universities could save upwards of $300 million by cutting wasteful spending. (There’s a lovely irony here, which Fagstein pointed out in a Tweet somewhere, how lefty groups like FEUQ and CLASSE trumpet cutting government waste as a solution.) Yet in most cases, what is crucial and what is waste depends entirely on what side of the table you happen to be seated.

For instance, is spending $80 million over five years on things like board banners at the Bell Centre a great way to attract new clientele? Or is it a “colossal waste of public money”, as CLASSE pithily put it? Is spending $8.6 million on satellite campuses, as Université Laval has done, a business-savy way of responding to a recognized demand amongst Quebec students? Or it is it a frivolous expense, right up there with McGill University president Heather Munroe Blum’s $16,000 vehicle allowance?

I haven’t a clue, but clearly CLASSE does: the group wants to cut ban universities from advertising, institute a moratorium on new campus construction, and tax the banks. Take a wild guess what the “or else” part of the equation is.

Clearly, university priorities and administrations are subjects worthy of debate, but by creating this “interim counsel”, which will likely be anything but, the Quebec government has essentially ensured they will be hashed out under the threat of more protests. It has mandated that a gun be put to its head every time negotiations roll around. We’re in for many long, hot summers, I’d say.