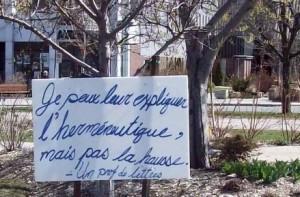 Walter Bruno is a retired professor living in the Montreal area. He has spent months pondering the meaning of a single sign with a message against the tuition fee hikes in Quebec.

Collège Montmorency in Laval is not unlike most Cegeps, the Quebec colleges that prepare students for vocational and undergraduate careers. It sits on a redeveloped mall in an older section of the Montreal-area city, and welcomes thousands of suburban kids into its halls. Like many such institutions in Quebec, Montmorency has been empty since mid-February, the site of student boycotts.

At the front of Collège Montmorency, on its entrance mall, stands a forlorn sapling (a bush that is fraught with metaphor, as it will someday mature into a tree). Chained to the fence around the sapling is a sign, a crudely lettered placard evidently left over from a protest rally. It says Je peux leur expliquer l’herméneutique, mais pas la hausse — Un prof de lettres (I can explain hermeneutics to them, but I can’t explain the [fee] increase – an Arts prof.)

One is immediately struck by this graffiti, which enacts a professor who can explain hermeneutics to people, but who is unable to explain a fee increase. It certainly raises issues that go beyond the boycott. Looking at it, I began to wonder at its provenance: was it a student initiative? An actual professor’s sign?  Did the student quote her professor verbatim? Did the teacher actually say it in class, or write it upon a chalkboard? Or was it paraphrased, an imaginary construct developed in a moment of heightened emotions?

Fascinated by the placard, I wrote to the college’s administration by email. I explained that I was a retired professor doing ongoing research in politics.  I asked them about the portentous sign and requested that they participate in my research by completing a questionnaire that clarified the placard’s origins.

Six months later I have not received an answer. While waiting, though, I have pondered other meanings in the sign. The placard expressed bewilderment by a putative Arts professor, perhaps someone in Communications or Literary Theory. However, the sign might actually be a student construct, pure fiction. If so, it would reflect how students have internalized, not their own protest, but the views of their mentors.

What of the students’ own opinions? They are divided, but it would be hard to find bodies of students naturally inclined to pay higher tuition fees, and consequently opposed to the protest. An automatic classroom majority could emerge – although it would not necessarily consent to a six-month boycott and the loss of a year’s credits. All in all, though, there was potential for protest sympathy among the students, particularly those at cegeps.

However, more interestingly, there was also potential for an easy, some might say, too easy, reinforcement of that stance by their teachers. All right, thought I, what are “arts professors” actually saying?

For months, the unions representing postsecondary instructors in Quebec had declared solidarity with the boycott. Then, on August 9, with the make-up semester set to begin, and during Quebec’s election campaign, we had another political statement. As quoted in the Journal de Montréal, the secretary general of the federation of (Cegep) professors declared that her members would not cross any picket line set up by any newly boycotting students. She specified that teachers might refuse to teach students who showed up for class.

So there are both professorial currents of thought and student currents, and they could be fusing into one very interesting protest sign. What does the sign really want to say? on behalf of whom? and what does it actually suggest? The sign-maker claims to not understand the fee increase, not even as a “professor of knowledge.”

In front of Collège Montmorency in early August the freighted sign was still there, albeit torn in half. With its complaint scrawled in cursives on poster-board, it still appeared to be the heart-felt jeremiad of some academic, perhaps an actor in this drama. In my own mind, it continued to provoke deeper questions.

For example, what obstacle had deterred the writer, this poster professor, from getting to the facts? Was she prevented from reading the research and summarizing the debate? The issues are not obscure: massive public debt, on the one hand, and dirt-cheap tuition on the other—for forty years. She tells us that she’s a teacher of hermeneutics and says she has no trouble giving students a definition of hermeneutics. Then what’s the issue in teasing out meaning for a long-delayed fee increase?

Perhaps the problem lay in being involved in hermeneutics for a living. Some readers may be baffled by the word or by its current use. In the postmodern era, hermeneutics involves mastering a very sophisticated system of meanings. This deals with codes that are both intended and unintended. Within postmodern critique, there may be a key outside of texts that unlocks both the text itself and textual critique, all of which may have meanings not available on the surface. Plain language won’t do it– Jacques Lacan comes to us only via Derrida’s hermeneutics, to give one example.

So we have to look at the text’s origins and real meaning. Assuming that the placard factually reports a professor’s thoughts, we could first ask how it arose. In that vein, we’d ask whether it was the product of empirical research. We’d also ask whether the professor explored philosophical tensions, those that contrast idealism with pragmatics, or those that are at play among ideology, economic theory, perception, and praxis.  Also, did she worry such issues as populism and Utopia?

With a few answers in hand we’d return to the placard and its meanings, both intended and unintended. In terms of intended meanings, we would ask whether there is, in fact, a viable government argument to be examined; also, whether there are, in fact, Arts professors who genuinely cannot fathom how tuition can be expected to rise in Quebec. That would deal with surface meaning.

But there may also be unintended meanings. Let us assume that the professor (or the construct of a professor) did possess a hermeneutic for the above, a code to unlock the fee rise. Let us also assume that, although in possession of the meaning, she kept her mouth shut, failing to transmit that hermeneutic to her students.

On the contrary, she just declared she had none. How would her students deconstruct that?