Quebec strikers may cross point of no return 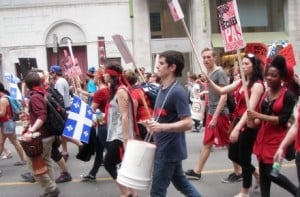 The student strike in Quebec, ignited by a $1,625 tuition increase over the next five years, is now the longest in provincial history—and participants may soon pass a point of no return.

Professors’ contracts require the semester to end by June 15 and some universities are hinting that the entire semester will be in jeopardy for students who don’t go back in time to meet that deadline.

The Université de Montréal, Quebec’s largest, announced Wednesday that it will extend the term into May for students who have already returned to class.

At the same time, it said it can no longer guarantee students who haven’t returned that they will be able to finish their semesters. Groups representing around 25 per cent of U de M are still on strike.

At the province’s second largest university, Québec à Montréal (UQAM), groups representing around half the student population are still on strike. There, the board of directors has adopted a plan that allows students to return as late as April 16 with the semester ending June 3.

Neither of Quebec’s large English-language universities, Concordia and McGill, plan to extend their semesters. Some of the largest student groups at those schools voted against the strikes.

For CÉGEPs, the deadline is even less flexible. CÉGEP courses must by law be 82 days long. Some CÉGEPs have cancelled some or all summer classes to accommodate an extended term. One of them, Collège de Valleyfield, has told students that they must return to classes on April 12. Strike organizers, meanwhile, say that more than 90,000 CÉGEP students remain on strike.

In that offer, the Liberals didn’t budge on tuition, but promised to introduce income-based student loan repayment in 2013, guarantee loans for all students whose family income is less than $100,000, and eliminate parental contributions for those from families making under $60,000.

These aren’t entirely novel ideas. The Parti Québécois was quick to jump on the income-based loan repayment plan, saying that the government promised a similar program in 2005 but never followed through. The sovereigntist party has promised to cancel the tuition increases if they’re elected.

But that is likely a long way off. Quebec isn’t required to hold an election until Dec. 2013. In the meantime, students will need to decide whether to go to back to classes or risk their semesters.