Meeting of 'education partners' confirms tuition will rise in 2012 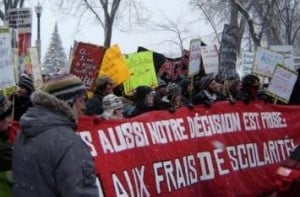 Students and police clashed at Quebec’s Hilton hotel yesterday where a meeting of “education partners” was being held. Although the meeting between government and university officials did not come to an agreement on how much tuition would rise, it was confirmed that it would indeed increase beginning in 2012. More than a 1,000 students showed up in protest.

Student groups were invited to the meeting, but representatives from Quebec’s largest student organization, the Fédération Étudiante Universitaire du Québec, left early on because the group said tuition increases were a foregone conclusion. Another student group, the Association pour une Solidarité Syndicale Étudiante, boycotted the meeting altogether for the same reasons. Both groups bussed in hundreds of student protesters from around Quebec to the capital.

Demonstrations were largely peaceful, but at one point several students were able to make it past riot officers and enter the hotel. According to the Montreal Gazette, “reinforcements from the Quebec City police riot squad then arrived, pushing the students back down the stairs. Police officers used their batons and students fought with sticks in the violent confrontation.” No arrests resulted from the battle, although one protester was apprehended earlier in the day.

Late last week, the Confederation of Quebec University Principals and Rectors announced that they want to see tuition rise by 70 per cent over three years.