An in-depth look at the nightly protests in Montreal 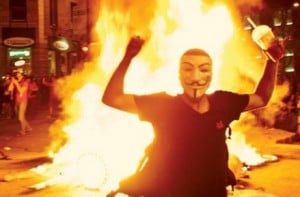 For the last month, thousands of protesters have taken to the streets of Montreal in what might be described as a schizophrenic display of righteous, pacifist outrage and opportunistic violence. Beginning at about 8 p.m. every night since late April, they gather at Place Émilie-Gamelin, a squared-off chunk of grass and outsized public chessboards formerly best known as downtown Montreal’s go-to spot for public drunkenness and illicit drugs. From there, the crowd marches off in a direction chosen by whoever happens to be in front. Purposefully, no one knows where the protest march is going.

For the next several hours, the marchers wind through the city streets. They shout slogans—denunciations of Premier Jean Charest and cheeky Nazi salutes are de rigueur—and otherwise fill the street with bodies and noise.

Men dressed as pandas and bananas are staples of this protest, as is “Angel Woman,” a pint-sized Filipino woman in a white gown and angel wings who offers police peace signs and the occasional flower. Police on bicycles track their progress at the front while their colleagues in riot gear waddle like helmeted penguins alongside.

When violence happens, and it often does, police often have little choice but to tolerate it; the sheer number of people on the street don’t allow for anything else. It projects out of the fringes of the throng like little sparks. Suddenly, windows are smashed, rocks are thrown, fires are set. Sometimes the police move in if it degenerates further. Usually, though, the crowd falls back into line after these violent hiccups, and continues on its way. On a recent Friday night, as has happened 15 times in the last month or so, the protest was declared illegal after Molotov cocktails were tossed. Yet the march continued because protesters “continued in a calm and peaceful fashion,” according to the police Twitter feed from that night’s protest. “Thanks [and] goodnight to you,” tweeted a police spokesperson to one of the force’s 32,000-odd followers at the protest’s end.

The protests have become Quebec’s (and, more specifically, Montreal’s) springtime conundrum: giant, unpredictable masses of people indignant at both the Quebec government’s steadfast decision to raise tuition and its attempts to forcefully quell the resulting fury. The conflict has sowed uncertainty for the $1-billion summer tourism industry. It has led to a harsh anti-protest law. And it has brought Quebec to a political and social stalemate at the beginning of what promises to be a long, hot summer.

Meanwhile, the rest of the country has looked on, a little confused. The conflict between students and government, which dates back to February, is over what are the lowest tuition rates in the country, which at just under $2,500 a year is less than half the national average. Even with the proposed hikes of $325 a year for five years, the fees would still be among the least expensive in the country. Moreover, roughly 70 per cent of Quebec students have eschewed the strike and finished their year. The noise you hear on the streets is coming from a few faculties at 11 of Quebec’s 18 universities, and 14 of its 48 colleges known as CEGEPs. For this, education minister Line Beauchamp fell on her sword, resigning when she couldn’t find a solution to the crisis. After this, masked protesters broke into classes and harangued students who dared go to class, some even pulling students from their seats.

And yet, the student movement is hardly made up of students alone. Far from it: grey hair and middle-aged paunches make up a considerable contingent in the nightly marches. “I’m marching with them because they stand up and give the example to the rest of the population,” says Christian, a management professor in his mid-40s at one of the striking colleges. “The students are the only ones doing anything.” For Louis Roy, president of the union federation Confédération des syndicats nationaux, this revenge of the baby boomers is a resurgence of the protest-fuelled ire against the status quo prevalent in Quebec in the 1970s—ironically enough, a status quo perpetuated by baby boomers as well.

“There are actually two categories of baby boomers,” says Roy, 59. “There were people who got caught up in the neo-liberalism, how everyone should do their part. And there are people who are the same age who believe in a more social state. The people in the street, young and old, don’t see themselves as neo-liberals. They are rebelling against what is typically known as the baby-boomer mentality of those in power.”

If this is true, then this baby-boomer battle is taking place at the political level as well. Since the start of unrest three months ago, most MNAs from the Opposition Parti Québécois have pinned a piece of red felt to their lapels—the symbol of support for the student cause. And though her party has waffled on the issue of tuition increases in the past, PQ leader Pauline Marois has since appropriated the position (and often the rhetoric) of the student movement. She recently accused Charest of “attacking the youth of Quebec” by increasing tuitions; PQ parliamentary leader Stéphane Bédard, meanwhile, recently uttered “go back to Westmount” to Charest during question period. (Westmount is the upper crust and historically English neighbourhood in Montreal where Charest lives.)

Until recently, though, Marois’s siding with the student movement was a political liability. Poll after poll throughout the conflict has given reason to Charest’s obstinacy on tuition fees; the most recent poll from the CROP market research firm said 60 per cent of Quebecers agreed with the government’s position. Charest, who has been mired in the cellar of public opinion for years, actually saw a bump in his numbers because of his handling of the strike. “You want better scholarships and a tuition freeze?” wrote La Presse columnist Yves Boisvert. “You know what? Me too. And trees made out of caramel.”

Yet much changed with the passing of Bill 78. Exasperated by the continued and sometimes violent street protests, as well as the student movement’s blockade of certain CEGEPs and universities, the Charest government introduced a law that would severely limit people’s ability to do either. The bill, which passed into law May 18, mandates an end to the school term until mid-August at the 11 universities and 14 CEGEPs where there are striking students—what proponents referred to as a “cooling-off period.”

Yet it is the other aspect of the law limiting the ability to protest that has created the most outrage. The law obligates any “person, body or group” organizing a protest of more than 50 people to advise police of the date, time, duration and route of the protest. The penalty for not doing so is up to $5,000 for individuals and $35,000 for associations.

The special law, which is set to expire in July 2013, also makes it easier for universities to withhold funds from student associations, and for individuals to bring class action suits against them. The scope of Bill 78 is huge, particularly considering how it took all of two days to pass into law. (By comparison, Quebec’s bill permitting photo radar in the province took nearly two years to become law.) And yet the first section of the Canadian Charter arguably allows for such “reasonable limits” of rights and freedoms, so long as they “can be demonstrably justified in a free and democratic society.”

“Everybody would agree that there’s a violation of the Charter,” says constitutional lawyer and expert Julius Grey. “The debate would be between those people who are more law and order, who would say that it’s necessary because of the situation, and therefore justified under Section One. Whereas people like myself would argue there’s nothing there that justifies it under Section One.”

Public support for the bill has been decidedly mixed. A Leger Marketing poll conducted since Bill 78 was passed suggested some 53 per cent of Quebecers believe the law goes too far—though 61 per cent believe protesters should have to give police eight hours’ notice to take to the streets. More telling, perhaps, is Quebec’s near-collective sense of pessimism: 73 per cent said the law will do little to end the conflict. Charest and Marois, meanwhile, remain largely neck and neck in popularity.

Many protesters, meanwhile, have taken a perverse glee in the government’s crackdown. “We’ve already won,” a twentysomething protester told Maclean’s on a recent Friday night. “We have shown Quebec Charest’s true colours.” Indeed, far from hobbling the movement, the law seems to have emboldened it. Half of the 1,000 arrests on the island of Montreal occurred in the three nights following Bill 78’s passage. Ironically enough, the police didn’t invoke the law in the first four nights of its existence, when some 500 arrests were made; the existing municipal laws barring “criminal acts” sufficed. (The police first used the law on May 22.) “People have been more radical and aggressive” since the passing of the law, says Montreal police spokesperson Ian Lafrenière.

What effect these protests have had on the city’s tourism industry remains unclear. According to Tourisme Montreal figures, hotel reservations were actually up in April compared to the same time last year, while the city’s conference industry hasn’t suffered at all. “We’ve had very few complaints from outside of Canada,” says Tourisme Montreal president Pierre Bellerose. “People come, do their business and leave happy. I saw the same thing in London, England, last year. People were rioting, some people died, and still the hotels were jam-packed.”

Violence, when it happens, seemingly comes from nowhere. During the protest held the night of Bill 78’s passing, police launched tear gas into a crowd advancing north along Boul. St. Laurent, claiming Molotov cocktails had been thrown in their direction. As a result, more Molotov cocktails rained down on police from the fringes of the group. In moments, one of Montreal’s busiest corners was streaked with fire and tear gas.

The chaos and violence increased in the nights following. Twenty-four hours later, protesters gathered at the corner of St. Denis and Ontario, mixing with the scads of tourists roaming Montreal’s Latin Quarter. A nearby road construction site provided pylons and metal grates for the ensuing barricade of the streets. Within moments the barricade was on fire. The next night, at the very same corner, the same barricade went up. With a police helicopter hovering overhead, two young men pushed a portable toilet into the intersection. Someone broke open a fire hydrant. A phalanx of police pushed the demonstrators out, though they were back within moments to build another barricade.

Standing amidst the angry and giddy chaos, it may look like just another Montreal hockey riot. At moments like these, it’s hard to think anything as noble as social justice is in the air. But there is evidence this new, powerful student movement has upended Quebec’s agenda and spurred the most draconian public security law in the province’s history. Politicians have resigned, and Jean Charest is facing the biggest challenge in his 10 years as premier. There is a sense on the streets and in the corridors of power that a province is being altered, perhaps irrevocably.