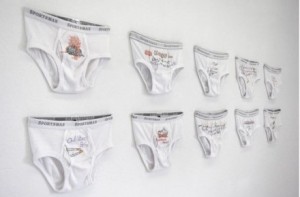 Queen’s University student David Woodward’s final project All I Am Is What I’ve Felt got the type of reaction many new Bachelor of Fine Arts graduates dream about: he was asked to take it down, meaning far more people will now see it.

Woodward, 22, was not surprised his work—10 white briefs adorned with cryptic slogans and images, some of them sexual—offended people. Still, he didn’t expect to be censored. He says the work is autobiographical and discusses “the limitations of romantic love.”

It has also stimulated discussion about the limits on freedom of expression at campuses like Queen’s where some employees get carried away in their mission to avoid offending anyone.

Here’s what happened. Woodward was asked by his campus alumni office, along with other visual artists and musicians, to show off his work to potential donors at an event in April. He forwarded a link to a website that showed his product. On the big day, he arrived early and hung his undies.

The organizers looked uncomfortable. Then a few women approached him and said they had some “very serious concerns.” They said the work was “inappropriate” and pointed to the f-word. (One pair, the most racy, reads: “only the freedom to f*ck the whole world.”) He was told to take it down.

You can see their point. They probably pictured a white-haired old woman so scandalized that she stuffs her chequebook back into her purse. Then again, it’s not nearly as controversial as some student art. New York’s Marc Bradley Johnson’s project Take This Sperm and Be Free of Me, invited guests to literally take his semen. An art student in Calgary recently beheaded a chicken.

That’s not the point. What’s worrisome is that if the organizers had more closely screened Woodward’s work, they might not have have invited him. That’s a shame. Art is meant to start a conversation and universities are supposed to be a place where uncomfortable questions can be debated.

Woodward agrees. “When we’re in a situation that’s uncomfortable,” he says, “we have to ask, why is this a trigger for me? If you look in the mirror a lot of interesting answers can be found.”

The good news is that Tom Harris, Queen’s Vice-Principal (Advancement) and superior to those who censored the artist, quickly sided with Woodward and apologized to him over the phone.

The bad news is that not everyone at Queen’s has yet grasped the repercussions of censorship, even after high-profile gaffes like that time campus security officers tore down a free speech wall.