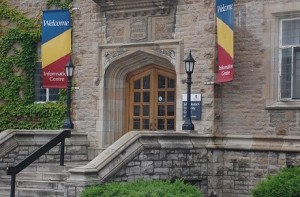 Queen’s University has arrived at a tentative agreement with 430 of its workers, avoiding a possible lock-out or strike.

The workers, represented by the Canadian Union of Public Employees (CUPE), include Queen’s maintenance and custodial staff, lab and library technicians, and residence staff. They have been without contacts since the end of June.

According to the Queen’s Journal, university administration and CUPE have been in negotiations since January, finally reaching a tentative agreement Saturday at noon. The agreement must be ratified by union members before details can be released.

“Our goal was to bargain effectively and fairly to reach a deal so our members can continue to provide the vital services that have helped build Queen’s reputation,” said Donna Carlaw, CUPE national representative, said in a release. “We have achieved this goal through perseverance and strong solidarity with our three locals and we want to thank everyone involved.”

Daniel Woolf, Queen’s University Principal, was also pleased the two sides could reach a settlement, saying, “These tentative agreements are a testament to the hard work and commitment of the negotiating teams and I want to thank everyone involved.

“The fact that the teams were willing and able to work through some significant issues speaks to a powerful, mutual commitment to the institution.”