Queen's University to bring back homecoming 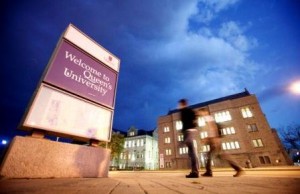 Queen’s Principal Daniel Woolf announced Tuesday the alumni gathering will be held on two weekends in the fall of 2013, Oct. 4-6 and Oct. 18-20.

The university announced a two-year suspension the event in November 2008 following a raucous September weekend that saw 140 arrests, 700 liquor charges and 23 severely intoxicated people sent to the emergency room as an estimated 8,000 partiers crowded onto Aberdeen Street, a two-block stretch of student housing. The annual event gained notoriety in 2005 after revelers jammed the street in droves, smashing beer bottles and lighting a flipped car on fire. In 2010, Woolf further delayed the return of homecoming by three years.