What students are talking about today (April 12th) 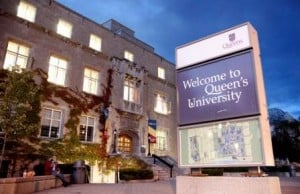 1. The city council of Kingston, Ont. has been accused of disregarding university students as it redraws electoral boundaries. Council voted that three of the 13 municipal electoral districts near Queen’s University will be merged into two, which means students will be represented by fewer councilors. This is despite a staff report that recommended taking into account the student population, which the city knows exists, even though they’re unlikely to be counted in official tallies that require voters to register themselves. Queen’s Alma Mater Society has expressed disappointment. “The AMS is dismayed by the attitudes that many of the Councillors expressed at the meeting, which reflected an aggressively anti-student attitude that is all too familiar—one which the AMS has been working for a decade to eradicate.”

2. A McGill University professor allegedly harassed a Muslim student from Cairo, an accusation that spread on social media and resulted in protesters chanting, “Hey, hey. Ho, Ho. Racist professors have to go,” outside of his lecture, reports the Gazette. The protest followed a Global News report that included an audio recording student Amr El-Orabi secretly made during a conversation with professor Gary Dunphy before El-Orabi quit school and returned to Egypt. In the recording, Dunphy accuses El-Orabi of cyber-stalking, refers to both the student’s God and his own God in unkind terms, and says, “don’t think for a minute that your culture is the be all and end all.” When El-Orabi asks,”is there anything else that you want from me now?,” Dunphy responds, “your death.”

3. Officials at the University of Saskatchewan’s are seeking information about strange posters on campus, reports The Sheaf. Campus Safety’s Brent Penner described one poster as showing a person with what appeared to be a firearm pointed at his or her head and showing something coming out the other side. Similar posters signed with the word “EMPTY” have been found on campus. Penner said the posters aren’t illegal, but he’s concerned for the artist’s health.

4. Last year, bringing therapy dogs to campus to help students cope with exam stress was such a novel idea that news reports about Dalhousie’s campus canines spread around the world. This exam period, everyone’s doing it, and local news reporters are all over the story. This week, therapy dogs hung out at  Western, Carleton University students were visited by Jack the Golden Retriever and students were treated to Labrador Retriever puppies at Simon Fraser University in B.C.

5. Ottawa post-secondary students managed to get a local concert with Rick Ross cancelled after protesting a song that appears to promote date rape. Reebok has now dropped the rapper too.