How do faculty measure up? How do grads fare? Maclean’s fourth annual survey reveals all

Are a law school’s professors significant contributors to the intellectual life of their discipline? Do a law school’s graduates land the most sought-after jobs in government, the private sector and academia? These are the two questions Maclean’s annual law survey seeks to answer.

All of the data used in the Maclean’s law rankings are publicly available. All focus on law school outputs. Fifty per cent of the overall ranking is determined by faculty quality, and 50 per cent by graduate quality.

The four measures of graduate quality look at the success each law school has had producing graduates able to land the most competitive jobs. The indicators are:

Elite Firm Hiring: Maclean’s calculated how many of each school’s graduates are serving as associates at law firms on Lexpert’s list of the largest firms in Canada across all regions, or at one of the five leading New York firms, according to the employment website Vault. This was done by examining the online biographies of thousands of lawyers at dozens of law firms. To scale this measure to each school, the tally was divided by first-year class size, averaged over the past three years. This measure is worth 20 per cent.

Supreme Court Clerkships: A measure of how many of a school’s graduates have served as clerks at the Supreme Court of Canada, this indicator is worth 10 per cent. There are 27 clerks each year; it is one of the most competitive positions open to graduates. Maclean’s looked at the last six years’ worth of clerks. As with the other measures of graduate quality, the tally was divided by each school’s average first-year enrolment.

Next page: Which school is on top?

The methodology behind the Maclean’s law school rankings was created in co-operation with professor Brian Leiter, the John P. Wilson Professor of Law and director of the Center for Law, Philosophy, and Human Values at the University of Chicago. The data were compiled by researchers Carson Jerema and Susan Mohammad.

Ranking on each indicator and overall rank was determined using the statistical percentile method that Maclean’s has long employed in our annual university rankings. Our statistician was Hong Chen, of McDougall Scientific Ltd. statistical consultants. 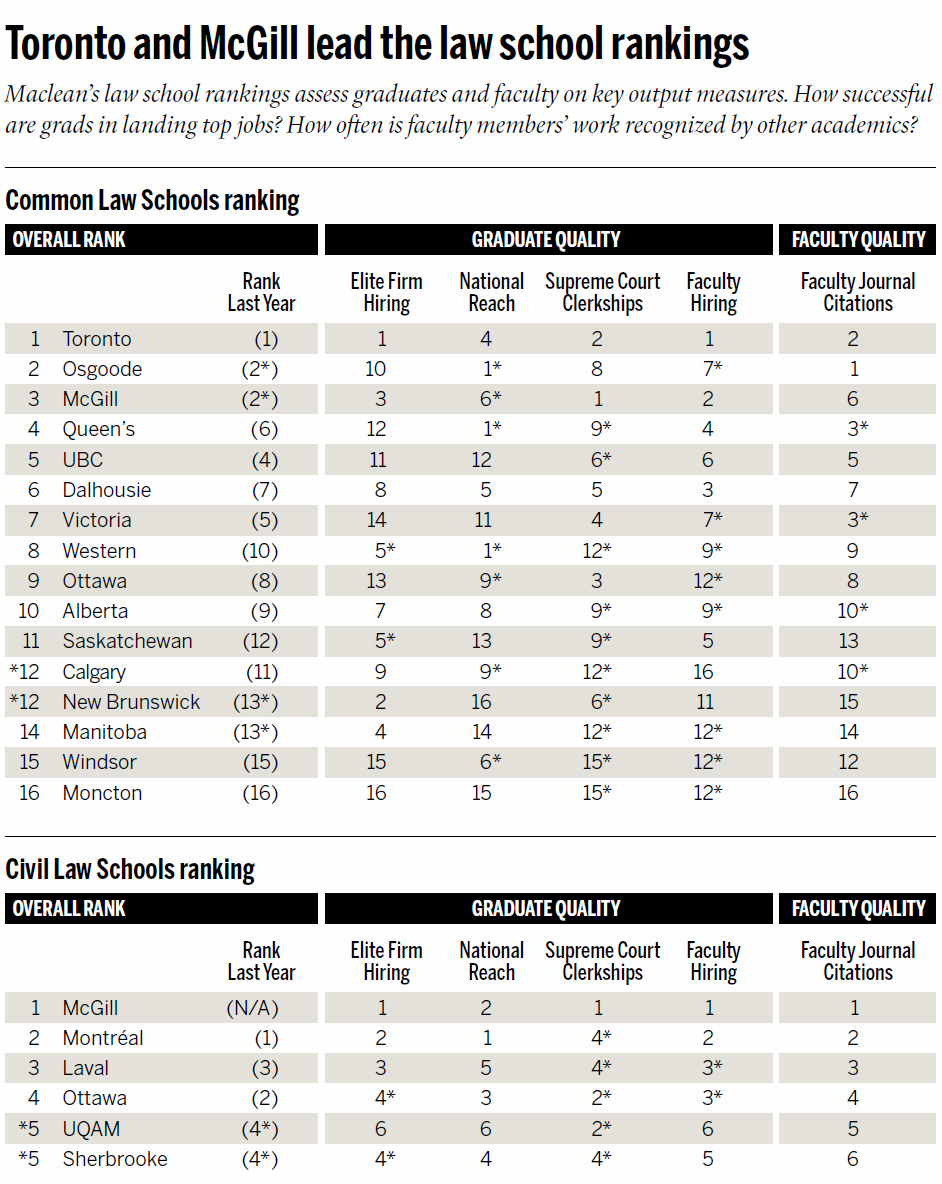