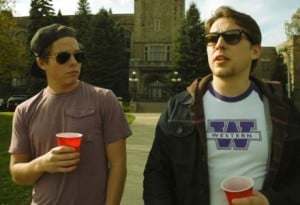 A University of Western Ontario student and his filmmaker friend have created a raunchy comedy series—and university officials aren’t amused.

It’s easy to see why. The trailer for 3 Audrey features multiple references to Western interspersed with jokes about a mother’s vagina, breast implants and excessive amounts of liquor.

3 Audrey is a six-part scripted series named for the house where a group of fictional Western students welcome a Carleton transfer student, Tommy Noble, into their oft-partying family.

It was co-written by Western media student Dave Provost and his 21-year-old director friend Miguel Barbosa, who is not a student at the school. Barbosa is part of YEAH! Films, a collective that plans to sell product placements in YouTube based viral videos. Provost took part in order to launch his acting and writing career, he says.

The teaser, which showed fictional Western students doing provocative things, instantly got 7,400 hits when it was posted online earlier this month. Western officials were among those to notice.

Provost, who plays Tommy Noble’s mentor Danny Rambis in the series, was jolted awake at 8 a.m. one morning earlier this month by a campus constable who wouldn’t tell him why he needed to get down to the police station, although he had a pretty good idea why she was calling, he says.

The constable interrogated him about the production, said that school officials and students’ parents found it offensive, and told him that he had a week to take it offline—or face academic consequences. He agreed that the teaser was in bad taste. He and Barbosa took it offline.

Then, on Boxing Day, they released the full-length trailer for the six-part series with a disclaimer that makes it more clear than the original teaser that 3 Audrey isn’t an official Western production.

Still, the conflict isn’t over yet. The series was shot partly on Western’s campus during a rowdy homecoming weekend and is so filled with shots of campus buildings, Western’s purple branded clothing and its sports teams that it would be impossible to cut out them all out, says Barbosa.

Considering the number references to Western in the trailer, the school has reasons for concern.

At second 16 of the trailer, Danny mentors Tommy in front of Western’s famous limestone University College tower. The tower is so recognizable as UWO that the school proudly uses as its logo.

“Party hard, but do your work or you won’t last,” Danny tells his understudy in front of UC tower.

At second 22, young women in yoga pants (Western purple, of course) are bent over provocatively while Danny advises a nodding Noble that “people are going to meet their wives at this school.”

Barbosa defends the excessive parties and the provocative women, by suggesting that those stereotypes of Western are commonly held. He points to viral videos like the “Saugeen Stripper.” Saugeen is the name of a first-year residence known colloquially as “The Zoo.” That particularly video helped UWO land the title of the only Canadian school in Playboy’s Top 10 Party Schools of 2011.

Besides, say the filmmakers, it’s okay to offend people when making art. “We’re just trying to show realism,” says Provost. “People should understand that it’s a fictitious series. We’re not showing anything that hasn’t been shown in American Pie or [TV-series] Blue Mountain State.”

Barbosa agrees. He says fewer people will be offended if they see the show in its entirety. There are negative stereotypes, true. But there are also positive ones. “People look at Western and think everybody there is a douchebag, cocky and stuff,” he says, “I want to show it in a different light.”

Barbosa says the close community at Western is what made it the right setting for the show. He’s even willing to give away the ending (spoiler alert) to prove that point. When Noble, the import from Carleton, finds out that his girlfriend at Queen’s has cheated on him, he realizes that his friends from Western will be there to support him. They’ve always had his back. They always will.

“We show it’s not the school you think it is,” says Barbosa. “There are really good people there.”

Still, the school is distancing itself from the series ahead of its New Year’s Day online launch. “At this point, it is too soon to understand the full scope of this show,” wrote Keith Marnoch, Director of Media & Community Relations in an e-mail. “If the show was produced to deliberately denigrate Western, that would certainly be disappointing,” he says, adding: “Obviously, anyone can shoot a video on campus, but commercially-produced programs require pre-arranged agreements…”

Although Barbosa didn’t seek an agreement for the production,YEAH! Films hasn’t made any money. They’re presenting the show in association with an Ottawa business for free. Barbosa plans to use it as a portfolio piece to sell product placements in future online series he will direct.

But as much as he feels the show shouldn’t be censored, Barbosa says that if his friend is at risk serious academic trouble, he’d be will consider removing the video. Friendship comes first, after all.