How guidance is failing our students 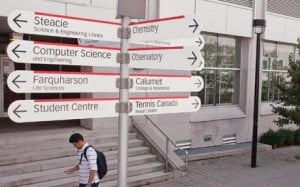 Until mid-July, 25-year-old James Douglas pretty much had his life planned out. A fourth-year political science student at a major Canadian university, he anticipated finishing his degree at the end of the summer semester, in August, and graduating with his B.A. this fall. Douglas was in touch with several prospective employers in Toronto, his hometown, as well as in Ottawa, and had allowed the lease on his apartment to lapse. Then he received the phone call that upended all of that.

The call came from the registrar’s office, and informed Douglas that his application for graduation had been turned down. At issue was a three-credit course taken early in his career that his academic adviser had sworn up and down could be put toward his degree as an elective. Not so, the registrar’s office now said. At his entreaties, university officials dug into “some dusty book with fine print on p. 709” and pronounced the course in question as unfit to count toward his poli-sci B.A.

Douglas—not his real name (like many students who find themselves in similar straits, Douglas is worried about repercussions from his university and that prospective employers may conclude he’s inept)—had assiduously met with his adviser, going over his degree requirements to make sure all was in order. Even his adviser agreed he’d given Douglas bad information, and approached university brass to tell them so. No good. “If I’m not supposed to get advice from my adviser, I don’t know who else to ask,” he says. “I covered all my bases, I did everything I could to ensure my graduation, yet it was still stripped from me at the last minute.”

Douglas appealed the decision, but meanwhile had to scramble to extend his lease and tap new funding resources. “The money I had for university was budgeted out over each semester—and, quite frankly, that’s run out,” he says. At the same time, those job possibilities evaporated. “My entire life has been put back four or five months because of this,” says Douglas. “With this strike of a wand, it’s just—poof!—your life, five months delayed.”

He’s not alone. Students are increasingly running into difficulties pulling together the credits they need to finish their degrees, often realizing at the very last minute they’re missing a crucial course. These situations arise because of frequently opaque departmental requirements, which students follow to secure degrees, particularly in programs requiring departmentally wide-ranging coursework. Compounding the trouble is a lack of student support—too few academic advisers, for example. Such crises frequently lead to lengthier-than-expected university stays—an extra semester, even an extra year, and life delayed. Although universities aren’t deliberately prolonging the agony, they benefit nevertheless—elastic degrees mean more tuition and fees paid by students (or their parents) into institutional coffers.

And things may even be getting worse, for all kinds of reasons. Financial pressures require many students to work in parallel with their studies, meaning they carry smaller course loads; that prolongs the duration of their degrees and increases the likelihood that course requirements will change in the interim—something that happens all the time. “What we’re seeing at a lot of institutions, because of changing economic times and enrolment down on some campuses, is that they adjust programs midstream as they struggle to change and stay relevant,” says Zachary Dayler, national director for the Canadian Alliance of Student Associations. “That can surprise students.” Those adjustments can include vanishing courses and obsolete requirements.

At the same time, even in this hyper-communicative age of social networking and connectivity, miscommunications at universities persist (just consider Douglas’s academic adviser, who doled out bum advice). “For whatever reason, students aren’t getting the information they need before something happens,” says Lisa White, coordinator of the Concordia Student Union Advocacy Centre, where students in academic jams can go for help. “They’re getting it right on the spot—‘Oh, you’re slated to graduate this date? Well, let me tell you that that’s not actually happening.’ It seems like the onus is on the students to get informed, rather than the university to inform them, and that, to me, is the major systemic issue.”

Of course, some of the blame, in almost all cases, rests with the student. “There is a service delivery component, and there’s a responsibility component,” says Dayler. “It takes time for a student to just generally read the curriculum.” And it makes sense that credit worries pop up most often for international students, for students who have done part of their schooling on exchange, and for those who switch programs midway through their degrees.

Still, there’s that nagging service delivery portion of the issue, which Dayler describes as an “ongoing problem.” Smaller schools tend to be better in this regard. Many universities in Atlantic Canada, for example, provide dedicated advisers who follow students through their entire degree—an “internal advocate.” That’s less likely at larger institutions, where many students find advisers hard to come by and harried, and where faculties and departments often operate more or less independently of each other, making it difficult to track course changes and shifting requirements. “This makes guidance counselling a difficult beast, as students have more options to complete their degree, with decentralized support services,” says one policy analyst at the Canadian Alliance of Student Associations.

That can also make for a lot of pavement-pounding and long frustrating lineups outside advisers’ offices. “I’ve known students who have waited months to just try and get an appointment with an academic adviser and figure out where they stand in their program and how much they have left to complete their degree,” says Alastair Woods, vice-president of campaigns and advocacy with the York Federation of Students at Toronto’s York University. “They’re sent on this wild-goose chase, to the department, to the faculty, then to an academic adviser—back and forth. There’s no one central location where students are able to pick their programs and see what they need.” Woods blames chronic underfunding for the lack of advisers at institutions like York, and adds that his students’ union has been lobbying the university to set up just such a centralized body—a one-stop shopping hub where students can get all the academic advising they need. (At least one big institution—the University of British Columbia—is in the process of launching dedicated advisers.)

Woods, 22, is a political science and international development double major who ran into a credit crisis in his fourth year, just as he was preparing to apply to graduate schools. His double-barrelled degree was part of the problem—a reality for many students enrolled in interdisciplinary programs. “For example, political economy,” Woods says, referring to one widely required course. “What program will it apply to? Will it apply to both [majors]? If not, what are my options?” It all became too much. “It actually dawned on me that I was missing some courses I needed to take to get this degree,” says Woods, who was able to work through the problem and has remained in university into his fifth year because of his extracurricular student union duties.

Another issue leading to last-minute crunches is the frequency with which institutions actually offer—or don’t offer—required courses. That problem, some years ago, led former University of Calgary president Harvey Weingarten to introduce a “guaranteed” four-year degree for some faculties at the U of C, a guarantee that includes assurances that required courses will be made available (participating students must agree to seek out appropriate academic advising). “This commitment to our students means they can access the courses they need to complete their degrees in a timely fashion,” Weingarten said at the time. The program is still ongoing.

It’s probably just a happy byproduct of all this confusion that universities earn money from it all. “When the university functions like a corporation, when their goal is to maximize the amount of revenues they bring in from students, they don’t really have a concrete interest in helping their students out,” observes Lex Gill, president of the Concordia Student Union. “If we can keep these students in the system and they’re going to keep paying even though they’re not meeting their degree requirements, what’s the incentive for [the universities] to stop?”