What students are talking about today (February 6th) 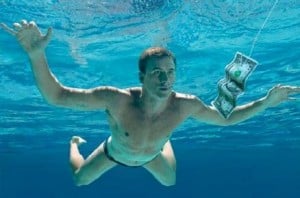 1. Olympic gold medal swimmer and dimwit Ryan Lochte has recreated Nirvana’s Nevermind album cover for ESPN The Magazine and everyone’s making the same joke about Kurt Cobain rolling over in his grave. Lochte subs in for the baby in the photo. He told ESPN that, “if you look at the baby, he’s definitely happy in the water. And that’s what I am.” He also noted, “he’s chasing after a dollar bill. So he’s always on the grind.”

2. Eight years after same-sex marriage became legal in Canada, Britain’s House of Commons on Tuesday approved a proposal that will allow same-sex marriage in England and Wales. The vote was 400 to 175. On the topic of gay rights, a photo has emerged of an unnamed West Point cadet escorting his boyfriend to a winter formal. The photo appeared on the Facebook page of Knights Out, the West Point alumni support group for GLBTQ soldiers. If gay couples can be accepted at the most prestigious military academy in America, it seems only a matter of time until the entire country follows.

3. Queen’s University held its first ever Black History Month opening ceremony last week. “I hope [what] Queen’s students take away from this is that there is a big Afro-Caribe culture here at Queen’s,” organizer Stephanie Jackson told The Queen’s Journal. Black History Month, originally “Negro History Week” when it was started in 1926 by black historian Carter G. Woodson, is held each February in honour of President Abraham Lincoln, who signed the Emancipation Proclamation in 1863, and Frederick Douglass, the famous anti-slavery activist. Queen’s president Daniel Woolf told the opening ceremony crowd that Black History Month won’t always be needed, but that it is today. Federal Minister of Citizenship, Immigration and Multiculturalism Jason Kenney honoured black law enforcement officers on Tuesday. Among the participants were Devon Clunis, Canada’s first black Chief of Police (in Winnipeg) and Lori Seale-Irving, the first black commissioned officer of the Royal Canadian Mounted Police. The government also drew attention in a press release to the Black History Virtual Museum.

4. “Good men are hard to find—at least on television,” writes Angela Johnston of MacEwan University’s The Griff. “The archetypes of bumbling doofus (for example, Melissa McCarthy’s counterpart in Mike and Molly) and sociopathic jerk (see Alex Karev in Grey’s Anatomy) have been abundant for decades, with few alternatives.” She notes a recent article in the The Atlantic explored this phenomenon and she’s been watching shows that don’t stereotype men, like Parenthood.

5. After a long delay, Concordia University has announced Canada’s first Major in Canadian Irish Studies will go ahead this fall. The bachelor’s degree will allow students to explore the history, literatures and cultures of Ireland and the Irish Diaspora. Courses include James Joyce, Irish Traditional Music: A Global Soundscape, The Irish in Montreal, Irish Mythology and Folklore, Field Studies in Ireland and Cinema in Quebec and Ireland. Michael Kenneally, director of the Centre for Canadian Irish Studies at Concordia, told Maclean’s in 2011 why interest in Ireland is so high in Quebec. “If you’re interested in cultural nationalism, colonialism, post-imperial identities, partition and decolonization, rebellion and independence, Ireland is a case study for all of that.”