Ryerson to decide on $10 fee for radio station

Previous station shut down by CRTC 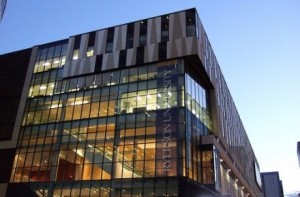 On Ryerson University’s Toronto campus Tuesday, newspaper boxes and streetlight polls were been plastered with advertisements urging students to vote for a new student-owned radio station in a referendum next week. The old campus station, CKLN-FM, was famously shut down in a rare move by the Canadian Radio-television and Telecommunications Commision in January. “York University has one,” reads one poster created by supporters of a new station.

But will that be enough to convince students? The cost, a mandatory $10.35 charged annually to each and every student, has caused an opposition group to organize against the proposal. The vote will happen between Oct. 24 and 26. Mark Single, a fourth-year engineering student, started the No to Ryerson Radio Committee: “Supporters see this as another way to grab money from students’ pockets who don’t have money in the first place,” he told The Eyeopener.

Not only that. Single argues that a new station will likely end up with the same types of problems CKLN encountered. Those problems, according to the CRTC ruling, included “significant infighting,” a seven-month lockout where an intermittent loop of programming was played and lack of “any significant quality-control mechanism for its programming.”

Ryerson’s student union will host a forum on Oct. 20 where each side can make their case.

On the topic of fees, a full-time undergrad English student at Ryerson pays $469.63 annually in student union and other mandatory fees (including $295.00 for a health and dental plan).