University isn't about making you feel good. It's about confronting challenges. 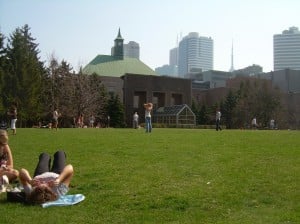 Ryerson University, in all her racist glory, graced the front page of the Toronto Star Monday.

I know; I couldn’t believe it either. I didn’t know purgatorial images were allowed on the front page.

Well, nevermind. The real story is that a university-commissioned probe into campus racism identified serious issues at the school. Its 107-page report recommended specific and swift action to tackle the problems.

So, what were the issues? Well, some were of legitimate concern. The Task Force on Anti-Racism at Ryerson cited a few specific examples of harassment and vandalism, which, I agree, should be dealt with harshly and swiftly.  But most of it? Hyperbole and pandering, I’m sorry to say. Obviously a task force committed to sniffing out racism will find something. They don’t want to be deemed useless, after all.

I’ve spent nearly four years at Ryerson and have personally found it to be one of the most multicultural, inclusive, and culturally sensitive institutions I’ve ever encountered. Sure, maybe that’s my complacency/privilege/ignorance speaking, but from what I’ve observed, the campus is fairly harmonious (which says a lot, considering it’s a university). Globe writer Marcus Gee shares my view. “Ryerson University is one of the most diverse and welcoming universities in the country, if not the world,” he writes. Gee continues:

Under president Sheldon Levy, Ryerson has bent over backward to celebrate and encourage diversity. The university already has active programs on employment equity, a special office to serve aboriginal students and a prayer space for Muslim worshippers. At the university’s Ted Rogers School of Management, five of the 11 faculty hired in 2008 were visible minorities, just short of its target of six. Other faculties are striving to bring up their numbers, too.

The Toronto Star ignored these details in its article. Here are the more… umm… poignant excerpts:

Some observant Muslim students complained teachers often use jokes about sex that can make them uncomfortable.

One professor who was teaching students how to modulate their voices for radio told the class to pretend they were having sex and to imagine the voice they heard when they experience “pleasure.” Other students joined in and began making “very weird noises,” leaving some students very uncomfortable.

This line’s a gem:

Others longed for teachers who look like them, especially aboriginal and black students.

And straight from students’ mouths:

“I think a lot of Jewish students don’t run for student leadership positions because of the hostile environment and so they don’t have to vote for anti-Israel resolutions.”

Hmm. So what? We should be hiring professors for their looks, not their qualifications? (I wonder if the Force will advocate on behalf of the few men in my program, who swim in a sea of aspiring women-journalist, for more professors who “look like them.”) And what of the inappropriate language? Sexual innuendos? Hurt feelings? I thought we were out of middle school.

University is not supposed to make you feel comfortable. Sorry. Stay at home if you want to be coddled. University is one of those unique places where individuals are encouraged to express their beliefs and challenge their assumptions. And yes, some will often be offended. Personally, I celebrate it. What better opportunity to explore your own preconceptions than face that which irks you? And if you don’t like it: avoid it, challenge it, but don’t stifle it. If university can’t be a sanctuary for free speech, what can be?

Compulsory anti-racism courses for staff and students, as recommended by the racism report, won’t fix anything. You can’t force out ideology with a couple obligatory lectures.  And telling profs to babysit or keep it PG is a dangerous step in the wrong direction. Oddly enough, I’ll think we’ll end up homogenizing if we keep catering to the multiplicity of hurt feelings. The real world isn’t sterilized, why should university be?

Related: A prof’s view of the Ryerson racism report