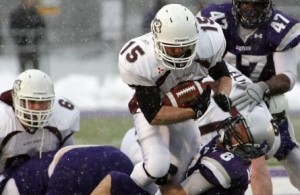 The move comes after an online publication produced by students at the University of King’s College School of Journalism cited a number of tweets from accounts it said belonged to members of the football team.

A spokesman for Saint Mary’s University said Monday that officials have spoken to the football players and are trying to confirm if they sent the tweets as reported in UNews.

Steve Proctor said if a player denies he sent the tweet, the university will conduct an investigation.

“We’ve told them they are suspended,” Proctor said.

“If they’re denying that it’s their posting, then we’ll go back and we’ll say, ‘Let’s look and see what the evidence is.'”

David Gauthier, the university’s academic and research vice-president, said in a news release the tweets aren’t consistent with the school’s values, calling them “completely inappropriate and unacceptable.”

One of the tweets quoted by UNews said: “to that b**ch that bit me last night. Hope your dead in a ditch. you are scum.”

In December, the university endorsed a report from an independent council that contained 20 recommendations on cultural changes to prevent sexual violence and inspire respectful behaviour and a safe learning environment at the school.