Saskatchewan MLA is a PhD student and a mom 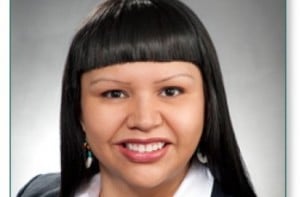 Running for office isn’t easy. But how many politicians can say they won their seats while parenting and working on their PhDs?

Not many. But Jennifer Campeau, the newest member the Saskatchewan Legistlature can.

Campeau, 38, is pursuing her PhD in Native Studies at the University of Saskatchewan.

The Yellow Quill First Nation members’ election in Saskatoon Fairview on on Nov. 7 marked only the second time a First Nations woman was elected to the Legislative Assembly in Saskatchewan and the first time an Aboriginal Canadian woman snagged a seat for the Saskatchewan Party, which cleaned up with 49 out of 58 ridings this month.

Despite the rigours of campaigning, Campeau chose not to take any time off from her studies.

“You’ve really got to be out there knocking on doors at least 3 hours a night, if not more,” she says. Still, Campeau doesn’t take the opportunity of post-secondary education for granted. A single mother, it took her a long time to earn her first degree. It was simply too difficult to study full-time while working to support her young daughter. “It was just the two of us so I didn’t have the support that I could have had to do well in school; I had to work to support us both,” she says.

“[But] when I was 30 and she was old enough to be in school all day, I’d had enough of telling her that education was important when I didn’t have a degree myself,” she says. Sometimes she would bring her daughter to class, explaining “it instilled in her the value of post-secondary education.”

Campeau now has a Masters in Business Administration from the University of Saskatchewan.

She’s pursing her doctoral degree in Native Studies to learn more about aboriginal policy. She says the economic challenges facing Yellow Quill First Nation are part of the reason she chose her field of study.

As an MLA, Campeau hopes to provide a voice for both Aboriginal Canadians and newcomers alike. “The Saskatchewan economy and population is growing, so we have a lot of people new to Saskatchewan in Saskatoon Fairview,” she says. “I want to bring their concerns to the table.”

You’re forigiven if it all sounds tiring. “In the last eight years, I haven’t really had a life of leisure, I’ve always been working and going to school,” jokes Campeau, “so I kind of got used to a fast pace.”