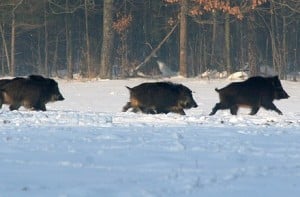 Ryan Brook is counting some not so little piggies.

The University of Saskatchewan researcher is heading the first scientific survey of the province’s wild boar population.

He hopes to have his data compiled quickly next year so he can persuade the provincial government to step up its battle against the pesky porkers before their numbers grow completely out of control. It’s a problem he foresees across the Prairies.

“I think the window is closing very rapidly,” says Brook.

“If we don’t take some very serious action over the next two years, then we’re very quickly going to be moving into a position where we’re simply trying to manage and live with wild boar, rather than eradicate them.”

Weighing 50 kilograms to 100 kilograms and armed with razor-sharp tusks, feral pigs were introduced in North America decades ago. Their population spread as they escaped from farms. They’re still raised for wild meat and, at some ranches, they’re prized trophies for hunting groups.

Brook compares the beasts to rats, because they eat absolutely anything and reproduce quickly. Females can have six or more piglets in a litter and two litters a year.

They also have no known predators and even cold prairie winters don’t deter them. They have longer legs than domestic pigs, so it’s easier for them to trudge through snow.

Most of all, they’re dirty pests. They carry many diseases that can be transferred to humans. In 2006, boars were linked to an E. coli outbreak in a California spinach field that killed three people and made more than 200 sick.

Brook says boars cause billions of dollars in damage to crops in the United States. And although elk and deer remain the top culprits in Canada, boars aren’t far behind.

“Their potential to blow that out of the water and have more impact than any other animal in Saskatchewan is very, very high.”

Brook says some research is being done to identify poisons specific to wild boars that won’t kill other animals.

But before the province can wage war, he says, officials need to get a handle on their numbers and distribution. “There’s a big black hole in terms of our understanding of where they are, how many we have.”

He continues to monitor two dozen cameras he set up near farmers’ fields across north-central Saskatchewan. He has created a Facebook group called Wild Hog Watch so anyone can send in photos and information. And he’s collecting data from rural municipalities.

He recently received a photo from one hunter who, while out targeting white-tailed deer in southern Saskatchewan, killed five boars.

Brook says the Saskatchewan government lists boars as dangerous strays. In order to kill them, hunters need to seek permission from landowners and rural municipalities. Of course, says Brook, many don’t bother asking before they shoot.

The Saskatchewan Association of Rural Municipalities receives some government funding to dispatch hired sharpshooters to problem areas. Brook says they have killed about 700 boars in the last few years.

Manitoba is about a decade ahead in trying to curb their numbers, says Brook. It’s legal to kill boars outside fences anywhere in the province.

In Alberta, the government has funded a wild boar program since 2008. Thirteen counties are signed up and pay a $50 bounty for every pair of boar ears people bring in.

The program results in 175 to 200 dead boars each year, says Cliff Munroe, head of regulatory services with Alberta Agriculture.

“That bounty is just scratching the surface,” he says. “There’s quite a number out there and they’re multiplying as we speak.”

Alberta hopes to pass a regulation next year that would force wild boar farms to register and which would outline fencing requirements. Right now, says Munroe, there’s nothing.

He says the next step is to come up with eradication measures. He thinks a dedicated group targeting boars, similar to Alberta’s famed rat patrol, would be a good idea.

Brook doesn’t necessarily agree. “Simply putting more hunters on the landscape is just going to put a dent in the population.”

He says when the boar population exploded in Texas, the government dispatched ex-military snipers with night vision scopes, even putting some of them in helicopters. At last count, there were still about two to three million boars in the state. The new residents have spawned a reality TV show called American Hoggers about a family that hunts down hogs.

Brook points out that Saskatchewan is the same land size as Texas. And officials need be wary of what can happen here if boar numbers aren’t controlled.

“Our potential to have a lot of boar in Saskatchewan is very, very high.”