What students are talking about today (March 18th) 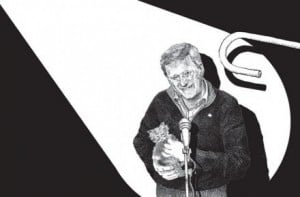 1. Remember before the last federal election when everyone was sharing that little website with the photo of Stephen Harper stroking a cat, plus pages and pages of one-liners about nefarious acts our PM was accused of committing? After Shitharperdid.com amassed 4.1 million in three days in 2011, we didn’t hear much about it again. Well, now it’s back in another form. Vancouver Comedian Sean Devlin, one of the site’s founders, is joining up with improv group The Sunday Service, Brigette DePape (the STOP Harper sign wielding page) and others for the Shitharperdid.com Live! Comedy Tour. Tonight it’s at the University of British Columbia and more than 350 people have told Facebook they plan to attend. Later it stops at Emily Carr University, Simon Fraser University and Douglas College.

2. Harper may have done some shit, but the New Democrats’ budget, released Monday, doesn’t offer an exciting alternative. In fact, it will only appeal to you if you’re a real person. “Real things for real people” has five prongs: better public transit, roads and bridges, fair pensions, health care for veterans, jobs for young people and small business investment, but it’s rather short on details. The “jobs for young people” section says the NDP would launch “a $500 top-up to the tax credit for small- and medium-sized employers who create jobs for Canadians aged 18-30.” Big deal.

3. London, Ont. officials must feel relieved that St. Patrick’s Day came and went Sunday without any major student-related incidents, unlike last year when students rioted near Fanshawe College, leading to 70 arrests. London Police did, however, seize at least 16 kegs, reports CTV. And a riot did break out, but that was in Ohio at the University of Dayton where more than 1,000 were arrested, reports the Columbus Dispatch. Things got only slightly rowdy in the university town of Guelph, Ont. where police seized 10 kegs, responded to 30 noise complaints and arrested nine for public intoxication. There were no major reports of problems in nearby Waterloo, Ont. I have one theory for the relative quiet in Canada this year. Unlike last year, it was just too cold.

4. The University of Toronto Students’ Union has become so dysfunctional that its vice-president external candidate dropped out mid-election. Sana Ali, who had been running unopposed with the (ironically-named) Renew slate, withdrew in an open letter posted on Facebook that has more than 300 shares and 1,500 ‘likes.’ Sana told the Varsity that she was uncomfortable with the “secrecy and micro-management” of campaign overseers, who included Alistair Woods, soon-to-be chair of the Canadian Federation of Students-Ontario and Brodie Metcalfe, who, Ali says, asked for her Facebook password. “When I decided to run for this position with this team, I was under the impression that I would have the opportunity to apply myself in order to create something good for students,” wrote Ali in her letter. “I have now been disillusioned. I was pulled on board this team to fill a space and fulfill a pre-set mandate, not to bring my brain.” One of the things Ali questioned was Renew’s opposition to online voting. Online voting has been a hot topic at many CFS-affiliated student unions where students have demanded it as a way to improve democracy, but executives have opposed it. The other Renew candidates posted some bizarre rambling video responses to Ali’s decision on YouTube, where comments have been conspicuously disabled.

5. The University of New Brunswick Varsity Reds hockey team won the Canadian Interuniversity Sport University Cup. They beat rivals the Saint Mary’s University Huskies, in a 2-0 game on Sunday in Saskatoon. It’s the fifth time the Reds have won the cup, reports The Canadian Press.