Should profs give points for showing up? 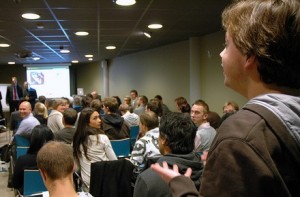 With final exams on the way and final grades right behind them, students across the country are wondering where they stand. How much was that mid-term worth? Can I still hand it that essay?

Oh, and what about my attendance grade?

Anyone who’s taught a university course has struggled with the question of attendance grades. The arguments against giving marks for simply showing up are clear. University students are supposed to be adults, and it’s up to them to decide whether they want to be in class or not. Besides, grades should reflect the actual work done in the course: just being there doesn’t mean you’ve learned anything. And giving an attendance grade means taking attendance in each class, and that is boring and time consuming.

But the counterarguments suggest themselves immediately. Students want good grades, so an attendance component should lead to better attendance, which might not guarantee that they will learn anything that day, but certainly raises the odds compared to the alternative. Further, some classes have collaborative projects and assignments that can quickly get derailed when people don’t show up.  It’s hard for an acting class to do its scene from Waiting for Godot if they’ve spent the whole term waiting for Gary.

While some US schools have policies that require attendance grades, Canadians have generally been less zealous. At my university, in fact, academic policy requires that no student can fail a class based solely on attendance, and since no one is entirely sure what this policy means, many of us simply avoid giving attendance grades all together. But even in the absence of such a policy, is it really right to fail a student who passed all of her exams and assignments just because she wasn’t there enough?

One way around the issue is not to give attendance grades per se, but rather, participation grades. This can be tricky because it’s sometimes hard to define “participation.” Since many students are reluctant to speak in front of others, some professors consider coming to class itself, and silently paying attention, as a form of participation.

But then we are back to something like an attendance grade, and in any case, participation in the broadest sense is difficult to measure. When I was at the University of Waterloo, there was a story going around where a student in a large class stood up at the end of the semester and asked the professor, “Do you know my name?” The professor confessed that he did not. “Then how,” the student demanded, “can you fairly give me a participation grade?” Whether the story was true or not, it gives one pause.

Still, participation grades remain common, at least in some kinds of courses, because they give a certain amount of credit where credit is due. Most intellectuals will easily agree that part of what we want to teach students is to participate in conversations, to question, to argue. Why shouldn’t we be evaluating students on those skills?

My own practices tend to be a series of compromises. First, in courses where there is a lot of lecturing and essay writing and where it’s unlikely I’ll learn everyone’s name, I tell my students there is an attendance and participation grade. Its 100 per cent. It’s all attendance and participation—because unless you come to class, and listen, and take notes, and study, and do your assignments, unless you attend and participate, you simply won’t be able to learn what you need to learn in the class.

In smaller classes where I can learn everyone’s name and where the nature of the course lends itself to discussion, I include a component that I call a “seminar” grade. But I make it clear that participating in the seminar means speaking up and answering questions, and asking questions. It’s not just showing up.