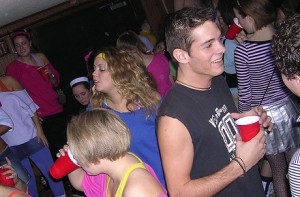 Keep on your best behavior St. Thomas students or you could not be a STU student no more. The university has a new code of conduct that will apply to your activities both on and off campus. A committee of university officials, students and faculty will now be able to impose punishments for things like hazing, including fines of up to $500 and expulsion. Seems draconian, right?

The new rules are the result of a policy review that followed the death of Andrew Bartlett. Bartlett died last October after attending his volleyball team’s initiation party at an off-campus residence where hazing and excessive drinking allegedly took place before he fell down a flight of stairs and fatally injured his head.

Though it’s clear that universities should be accountable for their students while they’re living, working and studying on campus, policing student behavior off-campus is more controversial.

But by limiting their code of conduct to occasions when students are clearly representing the university, STU’s new code of conduct strikes the right balance between student rights to behave how they like and the university’s right to protect its reputation—-not to mention their duty to keep students safe. The code rightly spells-out which behaviours are acceptable and which are not.

To violate the code, an incident must involve at least two STU students and occur at a university-sanctioned event or one where the student is representing the university. Hazing is highlighted, with a list of more than 20 examples spelled out. Overall, hazing is defined as “any activity expected of someone joining a group (or to maintain full status in a group) that humiliates, degrades or risks emotional and/or physical harm, regardless of the person’s willingness to participate,” reports The Aquinian student newspaper.*

The death of Andrew Bartlett is not the first incident to prompt questions about whether university discipline rules should reach off campus. Following allegations of hazing at the University of Alberta chapter of Delta Kappa Epilson fraternity at their off-campus location, the university suspended the fraternity for five years, disallowing DKE from using university services or associating itself with the U of A. Despite calls for a harsher punishment, there was little else the university could do to discipline the chapter under the U of A’s code of student behavior.

Another incident that stirred up debate on university discipline was the Stanley Cup rioting in Vancouver. Some wanted the University of British Columbia to punish those found guilty of taking part in looting. A spokesperson for the UBC told campus paper The Ubyssey that they would be letting the police and the courts determine discipline for any students involved in the looting.

Like STU, UBC made the right choice there too.It’s reasonable for universities to try to protect their students’ safety and their own reputations, but universities are no substitute for good parenting and good decisions on the part of students. Their duty only goes so far.

*This story has been updated from an earlier version that failed to attribute details of the draft code to The Aquinian, a student newspaper at St. Thomas University. Maclean’s On Campus regrets the error.