Should we "gamify" education?

Let's look at Hamlet as a first-person stabber. 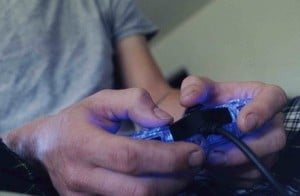 As I have argued elsewhere,  the easiest way to contrive something provocative about education is to point to some aspect of modern technology, note that young people are all over that, and then conclude that educators must adopt that technology or be hopelessly out of touch.

The most dubious example yet is what is being called — apparently with a straight face — the gamification of education. Here’s a summary from blogger Kyle Pearce:

studies have revealed that most students in the United States and Canada spend more time each day watching TV and playing video games than they do in school. This clearly represents a challenge for educators, to respond to students with the technology that they regularly use and understand. The current system of a teacher lecturing in front of a chalkboard (which has been the staple of public schooling since its invention in 1842) doesn’t make sense to many students who have grown up playing video games[…]

Okay. It’s ludicrous to suggest that children can’t figure out a chalkboard, whatever their technological sophistication, just as it is ludicrous to suggest that educators must adopt a new technology simply because young people know and understand it. By this reasoning we might argue that teachers should be talking to their students only on their cell phones since in-person conversation (developed a million years ago) doesn’t make sense to today’s students.

It would be nice if every new technology automatically made students more amenable to formal education, but they don’t. Take web searching, for instance, a technology older than some of my students will be this fall. As everyone knows, search engines like Google (which launched when today’s university students were elementary students) allows one to locate almost any fact available on the web in seconds. It follows then, that today’s students would be whizzes when it comes to factual data. They would check every claim to make sure it’s true because it’s never been easier to check claims. After all, they use Google all the time.

It doesn’t happen, generationally speaking. For instance, I require papers to cite sources using MLA parenthetical documentation style.  Google “how to use MLA style” and you get over 13 million hits. And yet students routinely turn in papers that make it clear that they don’t have the first clue what MLA style is or how to use it. Because they don’t want to Google MLA style. They want to Google when the new Harry Potter movie is coming out.

Speaking of sources, consider Wikipedia. For all its faults, Wikipedia (again, in existence since my students were little kids) strongly encourages citing sources. The Wikipedia entry on Shakespeare, for instance, has, at time of writing, 191 citations and a bibliography of over a hundred books and articles. Undersourced articles are tagged as such. It would follow from the technophiles’ arguments that the Wikipedia generation would see citing sources as a fundamental part of informative, compelling writing. They don’t. Indeed the most common comments I make on papers are “Source?” and “Evidence?”

If modern sources of information haven’t made students want to learn, I don’t have faith that modern sources of entertainment will fair any better. Playing Rock Band isn’t going to make anyone more interested in geological stratification no matter how much you wish it did.