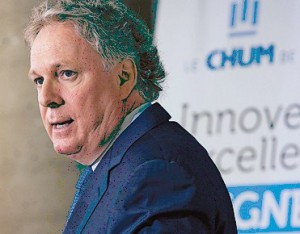 Late last March, Quebec Premier Jean Charest went to the site where the Université de Montréal’s new teaching and research hospital will eventually be built. Mugging for the cameras, he dug a shovel into a pile of dirt. Finally, a groundbreaking to kick off construction of what has become the province’s most elusive medical facility? Of course not. That ceremony simply marked the start of the research-centre portion of the CHUM, as the project is known to Quebecers. And although officials boasted that it represented “a turning point” in the planned hospital’s tortured history—and while it may have been a relief for the provincial Liberals to see something resembling construction get under way—it’s unlikely many in the province will soon forget the countless delays and cost overruns that have marred the project over the years.

The Charest government promised in 2004 that 2010 would mark the end of the CHUM’s construction, not its beginning. Since then, nearly $1 billion has been tacked onto the original $1.1-billion price tag. And yet, more than 15 years after it was first proposed by Jacques Parizeau’s PQ government, the hospital is nowhere in sight. Revised estimates now put the end of construction at 2019, though the CHUM’s Annie-Carole Martel says the bulk of the work will be done by 2015, when 486 of the hospital’s 772 beds will be operational.

Robert Lacroix, the rector of the Université de Montréal from 1998 to 2005, blames the protracted debate over the hospital’s location for the delays that have turned it into a provincial laughingstock. “It’s inconceivable,” says Lacroix, the co-author of Le CHUM : une tragédie québécoise, published last fall, “that it would take 25 years to build a 700-bed hospital.” Until the Liberals came to power in 2003, the CHUM was destined for a lot in the Rosemont neighbourhood of Montreal, northeast of downtown, and was expected to be completed by 2007. The decision to put it there was made by the Parti Québécois government in 2000. According to Lacroix, there was pressure inside the new Liberal government to put the hospital elsewhere.

In 2004, a government-appointed commission headed by former prime minister Brian Mulroney and former Quebec premier Daniel Johnson gave voice to that pressure, recommending the province build the hospital in the heart of downtown Montreal and push back its deadline for completion to 2010. Lacroix, for his part, promoted a third alternative: an abandoned CP rail yard near the university’s main campus in Outremont, extending the debate over the hospital’s location into 2005. Charest himself was on board with the Outremont site, Lacroix insists, but the premier lost a power struggle inside his government to health minister Philippe Couillard, one of the chief proponents of the downtown site. “It’s a patent case of a project going adrift because of politics,” he says.

Couillard, who left politics in 2008, denied having so much influence in a letter published in La Presse last September. He dismissed Lacroix’s claims as a “sinister conspiracy theory.” One thing, however, is indisputable—the project now ranks among the most unwieldy in the province’s recent history.

Just before Christmas, the Liberal government announced it would push ahead with a controversial plan to have the facility built and operated by a private-sector company, which will be selected in March. Construction can then begin in earnest this spring. That’s the plan, anyway.